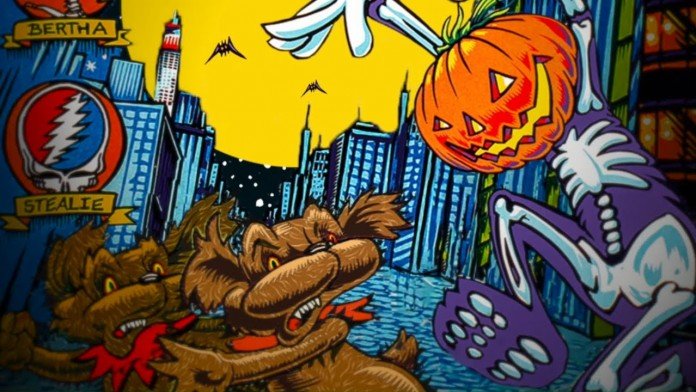 ead & Company jumpstarted the band’s “Fall Fun Run” mini tour last year in New York City with sold out shows at Madison Square Garden on Halloween and November 1. With the anniversaries for those shows quickly approaching, Dead & Company will release both concerts digitally on October 23. The group’s cover of Warren Zevon’s “Werewolves Of London” – the encore Halloween night – is available today on digital download and streaming services.

Like the other shows in Dead & Company’s ongoing digital concert series, both live performances will be available through all digital download and streaming services. In addition, the concerts will be offered in Apple Lossless and FLAC formats from Dead.net. Live audio for these recordings was mixed and remastered by Dead & Company’s Front of House Engineer, Derek Featherstone, and the band’s Recording Engineer, Ross Harris.

Halloween is one of the most eagerly anticipated dates on the Dead Head calendar and last year’s show was no exception. Despite the festive mood, however, there was a solemn undercurrent to the occasion as the band performed for the first time since the passing of longtime Grateful Dead lyricist Robert Hunter.

In a deeply moving opening to the show, Grateful Dead band members Mickey Hart, Bill Kreutzmann, and Bob Weir took to the stage by themselves while their newer bandmates John Mayer, Jeff Chimenti and Oteil Burbridge waited in the wings. The trio launched into “Ripple,” one of the most beloved songs Hunter wrote with Jerry Garcia, before the rest of the band joined them mid-song. That night, every song the band played – with the exception of the “Werewolves Of London” encore – was co-written by Hunter, a fitting and inspired tribute to the Grateful Dead’s beloved bard.

The following night, the power of Grateful Dead music to transcend generational boundaries was not only evident by the range of ages in the audience, but also on stage, where the band welcomed a surprise guest to the stage, Grammy nominated, 25-year-old singer-songwriter Maggie Rogers. She immediately showed why she’s one of the most acclaimed new artists to have emerged in recent years with her beautiful harmony vocals (and one verse on lead) on another Garcia-Hunter immortal “Friend Of The Devil.” Later, she made a return appearance for the encore to help sing a cover of The Band’s classic “The Weight.”

Dead & Company was formed in 2015 when the Grateful Dead’s Mickey Hart, Bill Kreutzmann and Bob Weir joined forces with artist and musician John Mayer, Allman Brothers’ bassist Oteil Burbridge, and Fare Thee Well and RatDog keyboardist Jeff Chimenti. The result was one of the most successful touring bands of the decade. Since its formation, the band has completed seven tours, playing to 2.8 million fans, and has become a record-breaking stadium act. Having toured consistently since its 2015 debut, the band has grossed $307 million across 152 shows.