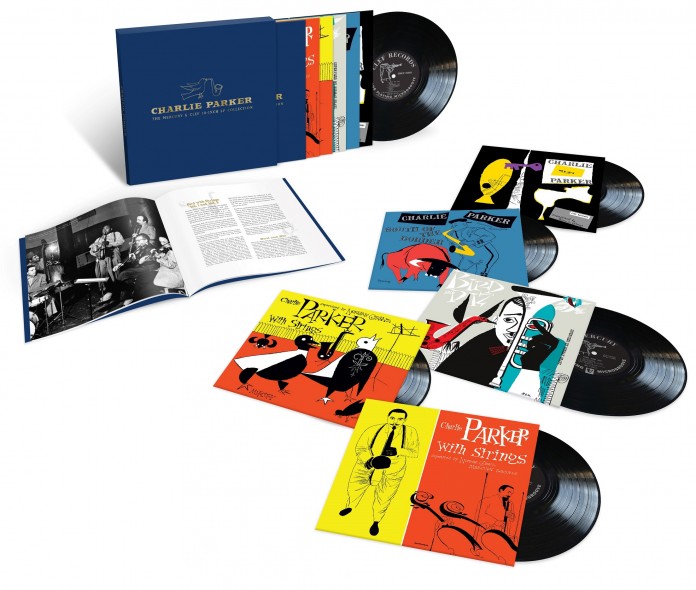 Charlie “Bird” Parker, an architect of modern music nearly universally regarded as the greatest alto saxophonist who ever lived, released five 10-inch LPs via Mercury Records and producer Norman Granz’s pre-Verve label Clef Records in the early 1950s. For the first time, these building-blocks of bebop — 1950’s Charlie Parker With Strings, 1952’s Bird and Diz and Charlie Parker Plays South of the Border, 1953’s Charlie Parker With Strings (Vol. 2) and 1954’s Charlie Parker, have been packaged together in honor of Bird’s centenary dubbed Bird 100. Parker’s complete recordings from this important cornerstone of his career will be released on Verve as The Mercury & Clef 10-Inch LP Collection on December 18, available exclusively via uDiscover and the official Charlie Parker webstore. All five records have been newly remastered, pressed to 10” black vinyl, and housed in faithful reproductions of the original packaging.

The boxed set, which features David Stone Martin’s strikingly illustrated original sleeve art, doubles as a tip of the hat to the 10-inch, a format popular in the late 1940s between the 78 and the 12-inch. It also contains an elegant booklet with rare photos, detailed session information, and essays by pianist-journalist Ethan Iverson and author David Ritz. All of the records included except Bird and Diz have been out of print on vinyl since their original releases more than 60 years ago (although the recent iteration of the album was not the original 10-inch). These attributes make The Mercury & Clef 10-Inch Collection the most detailed, collectible presentation yet of Bird’s fruitful 1940s-to-mid-’50s streak before his untimely passing in 1955 at age 34.

Some jazz-with-strings albums are hit-or-miss; Bird’s is a grand slam. He seized on the format; his Strings volumes are two of his recorded pinnacles. Vol. 1 begins with his immortal version of Sam Lewis and John Klenner’s “Just Friends,” which contains one of the most stirring and technically brilliant improvised saxophone solos ever recorded. Thomas Adair and Matt Dennis’s can’t-catch-a-break lament “Everything Happens to Me” receives a heavenly lift when Bird “sings” it on his horn. His take on Rodgers and Hart’s “I Didn’t Know What Time It Was” shows how Parker could channel a romantic ballad naturally as if breathing. Vol. 2 is just as inspired, conjuring a nocturnal feel via George and Ira Gershwin’s “They Can’t Take That Away From Me,” Arthur Schwartz and Howard Dietz’s “Dancing in the Dark,” and Cole Porter’s “Easy to Love.”

Bird’s most famous foil was the brilliant trumpeter Dizzy Gillespie, and Bird and Diz is what its title suggests: a portrait of the pair at full tilt. But it has historical and artistic import beyond that: Bird and Diz documents the only joint session with Bird, Diz, and the revolutionary pianist Thelonious Monk, who made intellectual, hard-charging music. “Bloomdido,” a Parker original that went on to be a standard, is toe-tapping and relentlessly melodic. The percolating melody to “An Oscar for Treadwell” is traced through the changes to “I Got Rhythm” in C. “Leap Frog,” a co-write between Parker and trumpeter Benny Harris is head-spinning in its velocity and quicksilver innovation.

Parker and Gillespie dabbled in Afro-Cuban forms, most notably with the pioneering Latin vocalist and percussionist Machito. South of the Border is a testament to Bird’s transcultural connection. In Iverson’s essay, the saxophonist Henry Threadgill notes “the rassling match when the modern jazz guys came in and tried to play with the Latin cats in the Forties.” Bird, however, did this effortlessly: “Charlie Parker could bring the music together, but as soon as Bird stopped, the rassling match would begin again.” Parker is in his element here, especially on Óscar Gómez and Albert Hammond’s zestful “Un Poquito De Tu Amor,” Zequinha de Abreu’s effervescent “Tico Tico,” and Manuel Ponce’s yearning “Estrellita.”

Bird recorded his self-titled album in 1952 and 1953 with two quartets featuring drummer Max Roach: one side with bassist Percy Heath and pianist Al Haig, and the other with bassist Teddy Kotick and pianist Hank Jones. The title is essential because of the strength of its performances, the clean recording quality relative to Bird’s earlier works, and its singularity as his only studio LP in a quartet setting. Although the end of his life was approaching, Bird more than proves his might on compositions now revered as calling-cards, like “Now’s the Time,” “Laird Baird,” and “Confirmation.”

The Mercury & Clef 10-Inch LP Collection caps off a banner year for Bird and acts as a bellwether for another to come. Ahead of the centennial, Verve/UMe released The Magnificent Charlie Parker on vinyl and Jazz at Midnite for Record Store Day. Next year, Verve Records/UMe will offer an illuminating new perspective on a previously underexamined chapter of Parker’s life with a new collection titled Bird In LA, featuring unreleased songs recorded during Bird’s storied visits to Los Angeles in the mid ‘40s through the early ‘50s.