In 1985, Eddie Van Halen filed a patent for a “musical instrument support.” US Patent US4656917A was described as: 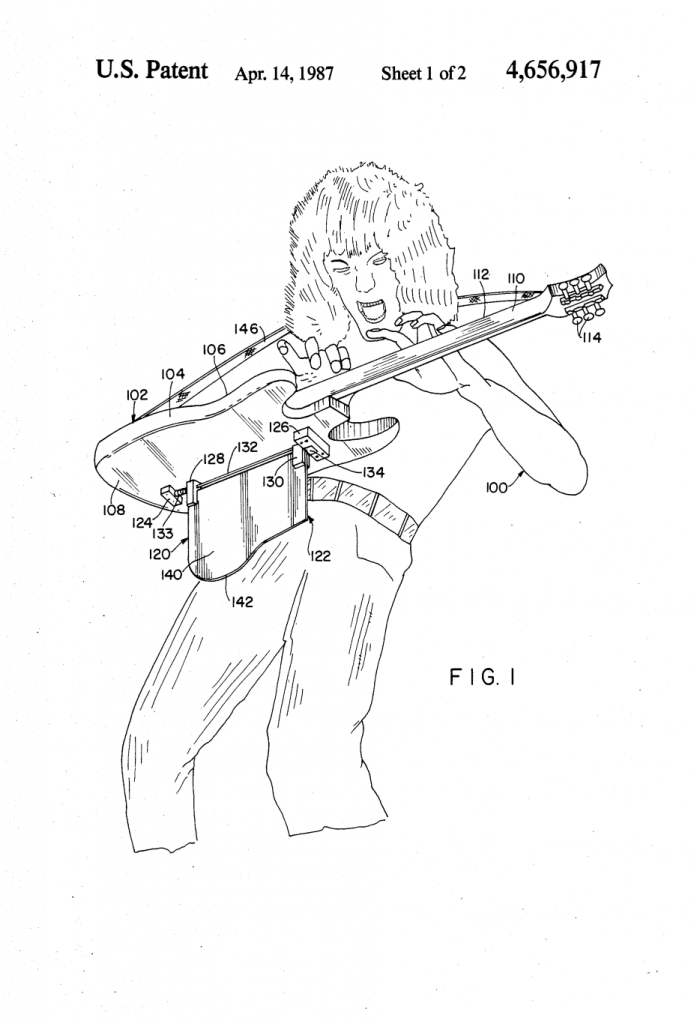 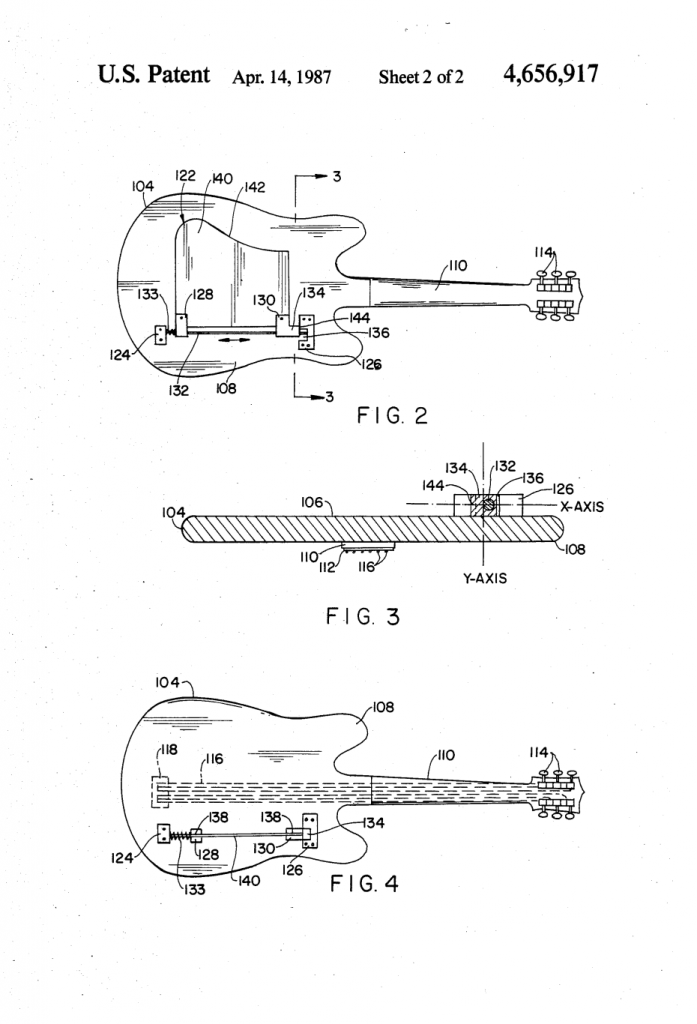 Here’s the full information on it.

The present invention relates in general to a stabilizing support for a musical instrument of the type having a body and fretted neck, e.g., guitars, banjos, mandolins and the like, and more particularly, to a musical instrument mounted device which positions the instrument in a substantially perpendicular orientation to a musician’s body to provide total freedom for the musician’s hands to play the instrument in a completely new way, thus allowing the musician to create new techniques and sounds previously unknown to any musician.

One such musical instrument to which the stabilizing support of the present invention is uniquely suited is the guitar. As a stringed musical instrument, the guitar is capable of being played by a variety of techniques which produce an equal variety of acoustical effects. In all such circumstances, the guitar is oriented with respect to the guitar player’s body in a manner to facilitate the manipulation of the sound reproducing strings by the player’s hands and fingers in an uninhibited manner. To create new playing techniques and sounds, it is desirable that the guitar be supported in a manner which leaves both hands of the player free to explore the strings which overlie the guitar body and fretted neck. In addition, as nearly all musicians prefer to view the fretted neck of the guitar as they are playing, to be sure that the proper notes or chords are being fingered, it is desirable that the guitar be arranged to afford the player maximum visibility of the guitar playing surface.

If the musician is in a sitting position, the guitar can usually be rested across the player’s lap and supported by the player’s legs. Even when sitting, it is sometimes desirable to provide means for supporting the guitar, other than directly against the player’s legs. For example, U.S. Pat. No. 1,285,802 discloses a device which is attached to the fretted neck to facilitate supporting the guitar when the musician is in a sitting position. However, it is not always possible, or even desirable, to be in a sitting position. Furthermore, even if it is possible, many musicians prefer to play from a standing position. This is particularly true of musicians who sing while they accompany themselves on the guitar. Of course, various types of support straps have been devised, which usually attach at opposite ends to the guitar body and fretted neck for placing about the neck and shoulders of the musician. These straps do not serve the purpose of leaving both hands of the guitar player free to explore the guitar, as well as maintaining the guitar in a substantially perpendicular orientation to the player’s body for a better view of the fretted neck. In fact, these straps tend to position the instrument in a substantially vertical orientation, so that the musician must still exert effort, generally with the hand gripping the fretted neck, so as to position the instrument in an oblique plane for better playing of the frets.

Accordingly, there remains as unsolved need for a universally acceptable device for stringed musical instruments of the type having a body and fretted neck, suitable both for supporting and positioning the instrument for better viewing of the playing surface and leaving both of the musician’s hands free to explore the musical instrument while the musician is standing.