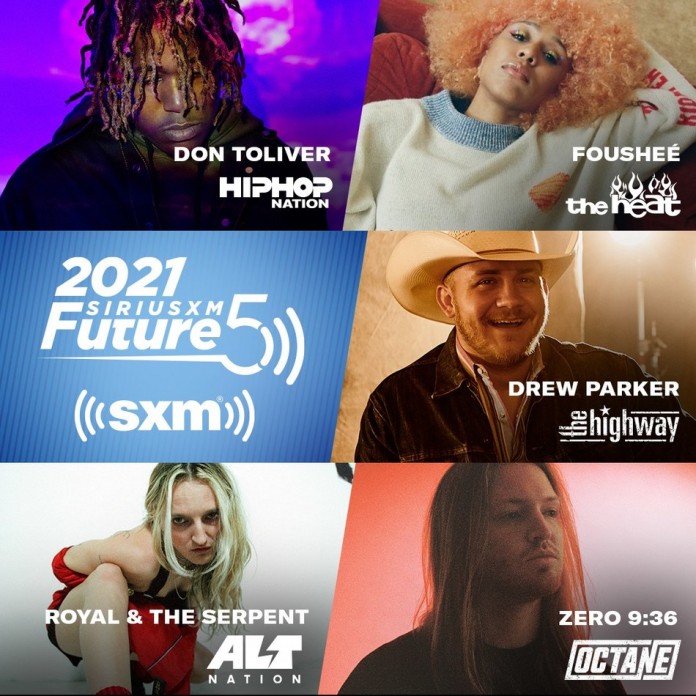 The music discovery and curation team at SiriusXM announced today its “Future Five” artists for 2021 and the “Class of 2020” during this unique and unparalleled year in music. 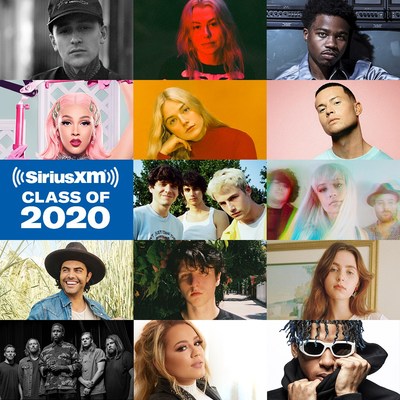 “In this year of dramatic change and challenges, SiriusXM has remained committed to being the premier music discovery platform for artists and listeners alike,” said Steve Blatter, Senior Vice President and General Manager, Music Programming, SiriusXM. “Our listeners depend on us to consistently introduce them to music from new and developing artists across all genres, and once again our team delivered.  We are proud to present our ‘Class of 2020’ and the ‘Future Five of 2021.'”

Don Toliver: The Houston rapper’s now Gold-certified hit “After Party” was first played on SiriusXM’s Hip Hop Nation on May 1, 2020, in which the channel continues to lead the nation on plays to date.   As an early champion, Hip Hop Nation remains one of the leaders on the song, which peaked at No. 10 on Billboard’s Top 100 and No. 6 on Forbes’ ‘Biggest songs of the Week’ list. Hip Hop Nation continues to support Toliver as a featured artist on Internet Money’s “Lemonade.”

Royal & The Serpent:   SiriusXM’s Alt Nation was the first outlet in the country to play “Overwhelmed” back in July of 2020 as part of the channel’s “Critical Cut” program. The artist was also a part of  SiriusXM’s Next Wave Virtual Concert Series last week.  “Overwhelmed” has now been streamed over 32 million times and is currently in the top 10 on the Alternative radio charts.

Zero 9:36:  The rapper, singer and musician’s aggressive style and angry world view helped him become a cult figure in the Philadelphia Hip-Hop community and rise to an alternative artist with a nationwide following by the age of 22.  Now at 25, his music reflects the combination of rap and singing as guitars and electronics take on a bigger place in his arrangements.  SiriusXM’s Octane was the first radio outlet to play “Adrenaline” as an Octane “Accelerator” on November 11, 2020, which has led to increased streaming numbers and still no other radio support.

The ‘Class of 2020’ is composed of artists that SiriusXM was first to commit airplay and playlist support and subsequently went on to have a major breakthrough year. SiriusXM’s commitment to these artists extends across multiple channels. This year’s class includes artists in the, pop, country, hip-hop, alternative, indie, and hard rock:

*Denotes artist as a SiriusXM “Future Five” for 2020

Alt Nation was the first broadcast outlet to play and add Ashe’s “Moral of The Story” at the top of 2020, within a week of its release, while SiriusXM Hits 1 followed the support as one of the first Top 40 radio channels to add the song, leading the nation in airplay. The song has since garnered over 170 million streams.

The SiriusXM Chill channel was the first broadcast outlet in the nation to play and commit airplay to Cannons’ “Fire For You” on May 12, 2020. That same month, Alt Nation became one of the first alternative radio outlets to feature the song on its new music show Advanced Placement. Both channels have led the nation in playing the record and the song has now entered the Top 10 on the Alternative radio chart.

Having supported indie-pop singer/songwriter Clairo since 2018, it’s no surprise SiriusXMU became the first broadcast outlet in the nation to play her song “Bags” from her debut full length album Immunity in 2019.  SiriusXMU’s support for Clairo’s song “Sofia” has led the nation in total airplay by more than double.  With over 93 million streams, the song just cracked the Top 20 on the Alternative chart.

SiriusXM’s BPM channel and Diplo’s Revolution were the first to support Joel Corry’s “Lonely” at the top of 2020. In July, both channels were again at the forefront in supporting Joel’s new music by playing  “Head & Heart” within 24 hours of the song’s release and have gone on to (along with SiriusXM’s Venus channel) lead the nation in support of the track, which has now accumulated over 64 million streams. The song went on to hold the No. 1 spot on BPM’s Top 20 Beats of The Week Countdown for eight  consecutive weeks. In August, all three channels again led the way in support of “Sorry” with Diplo’s Revolution being the first to play and continuing to lead the nation in support. All three songs have gone on to reach No. 1 on the Dance chart.

Country artist, Niko Moon has been supported by SiriusXM’s The Highway since 2019, when the channel became the first to play “Good Time” as a Highway Find.  To date, the channel leads the nation in total support  for the song, which has now garnered 125 million streams and is currently breaking into the Top 15 on the Country chart. The Highway’s support continued into 2020 by leading the nation on airplay for Moon’s songs “Paradise To Me,” and most recently “Dance With Me.”

After supporting NLE Choppa back in 2019 by playing “Camelot + Remix” more than double the amount of any other radio channel to date, SiriusXM’s Hip Hop Nation and The Heat became two of the first radio channels to play “Walk Em Down” f/ Roddy Rich earlier this year as well.  The song has gone on to reach the Top 10 on the Urban chart, while Hip Hop Nation also currently leads the nation in radio support for his latest single “Narrow Road” f/ Lil Baby.

In April of 2020, SiriusXMU world-debuted Phoebe Bridgers‘ song “Kyoto” prior to the drop of her now Grammy-nominated album, Punisher, which the channel also supported with an exclusive SiriusXMU Session. Additional support came from The Spectrum, Alt Nation and The Pulse over the summer of 2020. To date, Spectrum leads the nation in total airplay of “Kyoto,” and the song has now accumulated 13+ million on demand streams to date. Bridgers has since been nominated for four Grammy Awards in the categories of Best New Artist, Best Alternative Music Album and Best Rock Performance in 2021.

In February of 2020, Alt Nation became the first broadcast outlet to play “Deathbed” from Powfu, as part of the channel’s new music program, Advanced Placement. Soon after, the song was added to regular rotation on Alt Nation as a “Critical Cut.”  The record reached No. 2 on the Alternative chart in late June, landed in the top 10 on the Top 40 charts by August and has since accumulated over 360 million streams.

Alt Nation has supported Wallows since early 2018, and has continued that trend year after year, as the first radio outlet to support their song “Are You Bored Yet?” feat. Clairo  in March of 2019, which was prior to the release of their debut full length album Nothing Happens.  The song reached No. 2 on the Alternative chart in November of 2020 and has garnered 205 million streams to date.

Rounding out the ‘Class of 2020’ are the artists selected for SiriusXM’s ‘Future Five for 2020.’ All five artists had an undeniable breakthrough year in music.  Arizona Zervas first found early support of his now multi-platinum hit “Roxanne” on SiriusXM’s Hip Hop Nation, The Heat and Hits 1. The now Grammy Nominated singer/songwriter/rapper/producer, Doja Cat received her first national airplay for “Juicy” on SiriusXM’s Shade45, while The Heat, Venus and SiriusXM Hits 1 have all continued to support her music in 2020.  SiriusXM’s Octane was the first to play “Right Now” from rock-band Fire From the Gods, and their song went on to reach the Top 10 on the Active Rock charts.  For country artist Gabby Barrett, SiriusXM’s Highway was at the forefront of playing her breakthrough song “I Hope” when she was still an unsigned artist. The song went on to reach No. 1 on the Country chart, No. 4 on the Pop chart and has since accumulated over 525 million streams. Finally, Grammy Winner Roddy Rich was championed early by SiriusXM’s Hip Hop Nation, and continues to be supported by the channel as Rich heads into 2021 with eight Grammy Nominations and his breakthrough song “The Box” has garnered over 1.4 billion streams, the most of any song across all genres in 2020.

SiriusXM subscribers can listen to music from all these artists and more via SiriusXM radios on the SiriusXM app and at home with Amazon Alexa, the Google Assistant or however they stream in their house.  Streaming access is included for most subscribers. Go to www.siriusxm.com/ways-to-listen to learn more.