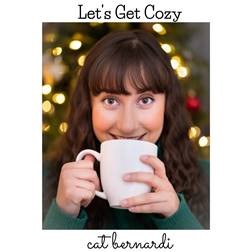 From smooth jazz vocalist Cat Bernardi, comes her very first holiday single, “Let’s Get Cozy”, with music video to come on December 21st. This single is the title track of a holiday season EP of the same name and was generously supported by the Mississauga Arts Council’s MicroGrant award.

“Lots of people are unable to connect with those outside of their households and unable to partake in the typical activities they would at this time of year,” says Bernardi of her new holiday single, “It celebrates the simple beauty of being at home and making a special event out of spending time with people in your household and taking a break in the solace of the home.”

Bernardi studied Jazz Vocal Music at both York University and Humber College, where she had the opportunity to train under accomplished musicians such as Jane Fair, Maria Farinha, Sacha Williamson and Michael Donovan. Through Toronto Jazz Workshops, she has also had the opportunity to train with jazz legend, Barry Harris. It was not long before she began composing her own music, arranging her favourite standards and playing with several ensembles around the city including the Toronto Jazz Chorus, York University Jazz Choir, and her own group, the Cat Bernardi Quartet.