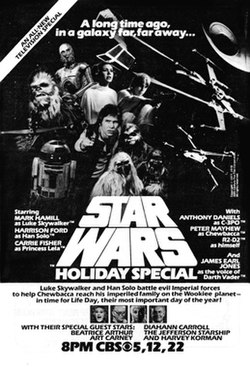 The Star Wars Holiday Special is a 1978 American television special set in the universe of the Star Wars science-fiction media franchise. Directed by Steve Binder, it was the first Star Wars spin-off film, set between the events of the original film and The Empire Strikes Back in 1980.

In the storyline that ties the special together, following the events of the original film, Chewbacca and Han Solo attempt to visit the Wookiee home planet of Kashyyyk to celebrate “Life Day”. They are pursued by agents of the Galactic Empire, who are searching for members of the Rebel Alliance on the planet. The special introduces three members of Chewbacca’s family: his father Itchy, his wife Malla, and his son Lumpy. The program also features the rest of the main Star Wars characters, including Luke Skywalker, C-3PO, R2-D2, Darth Vader and Princess Leia, all portrayed by the original cast (except R2-D2, who is simply billed as “himself”). The program includes footage from the 1977 film and a cartoon produced by Toronto-based Nelvana featuring the bounty hunter Boba Fett. Scenes take place in space and in spacecraft including the Millennium Falcon and a Star Destroyer; segments also take place in a few other locales, such as the Mos Eisley cantina from the original film.