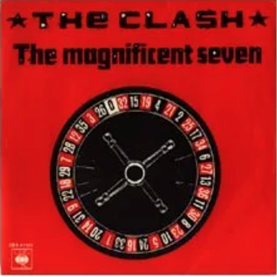 The Magnificent Seven was released as a single from The Clash’s fourth album ‘Sandinista!, a 3-disc collection of songs released in December 1980 which showcased the band’s wide musical taste and the influence of the burgeoning New York hip hop scene. The song earned the distinction of being the first rap record by a rock group, and until now has had no official video.

There’s a new clip for ‘The Magnificent Seven,’ shot and edited by filmmaker Don Letts and uses footage of The Clash (Joe Strummer, Mick Jones, Paul Simonon & Topper Headon) performing the song live on The Tomorrow Show with Tom Snyder (a late-night New York chat show) cut with previously unseen film of the group in and around New York and during their legendary 17-night residency at Bond’s International Casino, near Times Square.

“They were always ahead of the game – Sandinista! signposted the multi-cultural way music was going and the elements that make The Clash great are still a currency that’s recognized by youth in the 21st century,” says all-around genius and great guy Don Letts.