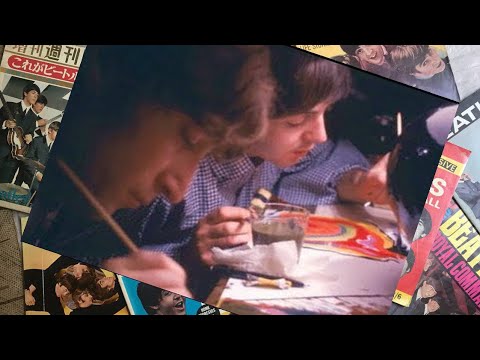 The Beatles (Paul McCartney, George Harrison, John Lennon, Ringo Starr) painting Images Of A Woman, Tokyo, 1966
The oil and watercolour artwork was created by The Beatles in June and July 1966, while on tour in Tokyo. Tight security measures meant they were unable to leave their suite at the Hilton hotel for three nights, so they collaborated on a painting which became known as Images Of A Woman.
Each Beatle painted parts of the 30″x40″ paper, working by the light of a lamp in the centre. When the painting was complete the lamp was removed, and The Beatles signed the empty space next to their contributions.
The paper and paints were provided by the Japanese promoter, Tats Nagashima, who suggested that the completed painting be auctioned for charity. It was subsequently bought by a cinema manager and local fan club president Tetsusaburo Shimoyama.
Images Of A Woman is believed to be the only instance of a painting by all four Beatles. It was sold again in Osaka for ¥15 million, and in 2002 appeared on the eBay auction website.