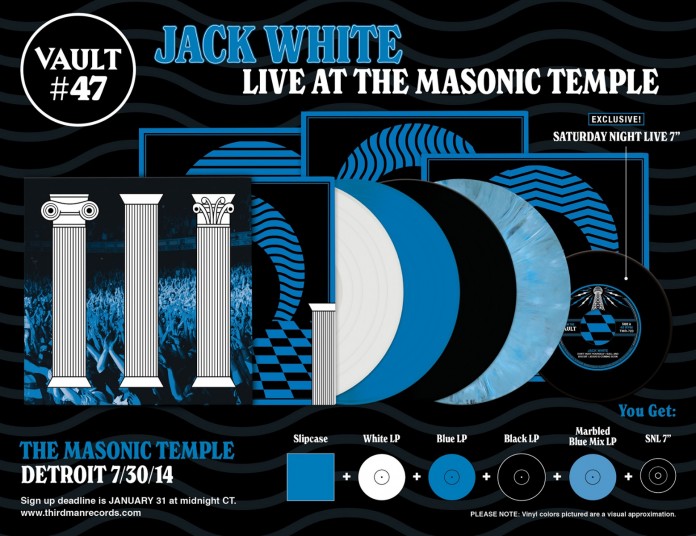 On July 30th, 2014 Jack White played one of the most captivating live shows of his career. With the friendly confines of Detroit’s Masonic Temple providing as much of a home field advantage as White could ever get, this tour-de-force, three hour plus, 38 song barn-burner of a set spanned the breadth of his recorded career and left all comers in its wake gobsmacked, a testament to the undiminished magnetism of a performer at the height of his powers.

Kicking off at breakneck pace with three sizzling fan favorites from the White Stripes back catalog, the impromptu song selection never loses focus and instead delivers body blow after body blow of unrelenting passion. Inspired, off-the-cuff covers of Beck’s “Devil’s Haircut” to Zeppelin’s “Lemon Song”, Hank Williams’ “Ramblin’ Man” to Junior Wells’ “Hoodoo Man” absolutely delight. White’s Dead Weather bandmates Alison Mosshart and Dean Fertita unexpectedly join onstage for a particularly heavy version of “I Cut Like a Buffalo.” Chock full of delightful stage banter, local references and even a laugh-out-loud takedown of a supposed icon (you’ll have to listen to know exactly), the performance manages to blow everyone’s mind, both satiating desire and yet quizzically also leaving them wanting more…such are the paradoxes of a truly transcendent evening.

As Third Man Records’ 47th Vault package, they are proud to present here for the first time, Jack White Live at the Masonic Temple 7-30-14. Spanning four 180-gram colored vinyl LPs, housed in an immaculate slipcase cover with custom printed photo inner sleeves, bedecked with stunning photos shot that evening by official tour photographer David Swanson, the overall package is exquisite and grand in a manner befitting of the audio it contains.

For an extra special added bonus, Third Man is including a 7-inch single of Jack White’s October 2020 performance on Saturday Night Live. Jumping in with two days notice to fill the musical guest slot, White unleashed an explosive power trio medley of “Don’t Hurt Yourself” (a song he co-wrote with Beyonce and included on her “Lemonade” album) into the White Stripes’ classic “Ball and Biscuit” while interpolating elements of “Jesus Is Coming Soon”, a song originally written by Blind Willie Johnson about the 1918 Spanish Flu outbreak that feels uniquely relatable in light of the current COVID-19 pandemic. On the flipside is White’s blistering reimagination of his 2014 track “Lazaretto” with a brief, respectable, finger-tapping solo nod to Eddie Van Halen (performed on an EVH signature model guitar), who passed away earlier that week. Inarguably one of the most talked about and praised Saturday Night Live musical performances in some time, it felt only right to enshrine these takes into the vinyl permanence. Get it here.