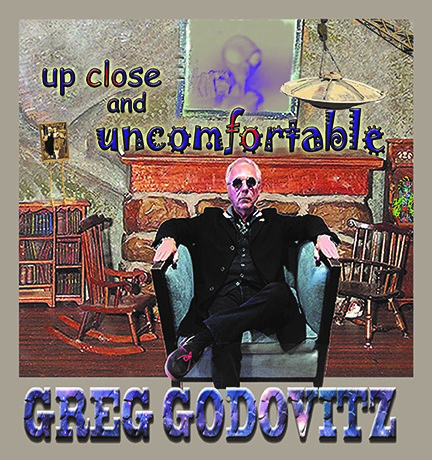 Legendary Canadian musician and author Greg Godovitz continues to be an open book with the release of his new book, Up Close And Uncomfortable — available now.

As a member of Fludd, Godovitz held eight Top 10 hits — including SOCAN Hall of Fame inductees with over 100,000+ airplays a-piece,“Cousin Mary,” “Brother and Me,” and “Turned 21.” As a member of Goddo, he released 11 albums while touring extensively; one such concert was front and centre for its 35th anniversary as a big-screen movie, The Return of the Pretty Bad Boys, in 2014. He’s been a member of The Backdoor Blues Band, The Pyggs, Sherman and Peabody, The Mushroom Castle, The Carpet Frogs, The Anger Brothers, and The Pretty Ones — “I started playing bass guitar in that band in 1964,” he says of the latter, “but I wasn’t very good — until I started practicing.”

He’s got a new group, The Greg Godovitz Coalition; he released a solo album, aMuseMe, in 2019 with Paul Dean (Loverboy) on production; he’s written well over 200 songs, but says “some of them stink,”; he had a weekly radio show, Rock Talk, where guests like Ray Manzarek (The Doors) would hang up on him because he was goofing on them; he’s met two Beatles, three Rolling Stones, two Kinks, and one Virgin Billionaire; he’s set his sights on preserving history, be it through resuscitating the notable iconic venue, the elMocambo, or creating the Toronto Sound Museum.

All this to say, in his 57+ years in the industry, Greg Godovitz has seen it all. And luckily for audiences, he’s thrilled to set his tall tally of tales free.

The first peek behind the curtain came in 2011 thanks to Godovitz’s autobiography, Travels With My Amp. An instant hit, the release went on to become a national best-seller with three printings.

While additional short stories appeared in the National Post and Toronto Sun, they did little to satiate his audience’s appetite for more.

“After the success of Travels With My Amp, people wrote in asking for more, so I started the process again,” he shares. “After one hundred pages of more insanity, I realized I was just repeating myself.

“This is why there’s no sequel to Travels; I decided on something different.”

While he notes Up Close And Uncomfortable is equally as funny, “it isn’t quite as disgusting as the first book…”

It’s stories “like sitting next to a shape-shifting Alien on a late-night flight,” he muses, adding that he was the recipient of an outer space implant in his brain as a result. “Like submitting one of my much-requested recipes that only got the reader drunk if they followed my instructions. Like how I could get in the Last Will of Aunt Toni when I found out she had an original Van Gogh stashed in Geneva…

“Like meeting Ringo, or spending a night in jail for hiding a computer mouse, or starting my own radio show… Everyone who has read it says it’s very funny and, considering the current state of our world, that’s not a bad thing.”

Among his earliest collection of critics, producer, engineer and author Eddie Kramer confirms the sentiment, saying “after I read Greg’s second attempt at trying to beat Shakespeare at his own game, I realized his personal observations about the real world of rock n’ roll are bloody brilliant! I urge anyone out there who wants to ‘belly laugh’ at the absurdities of life on — and off — the road with one of Canada’s true originals (to) read this damn book, and be prepared for extra underwear and a box of tissues!”

“Look, if you’ve been in the business as long as Greg has, and you don’t have any stories to tell, you blew it,” author and publicist Richard Flohil says of Up Close And Comfortable. “But Greg has stories — funny, sad, hilarious, thought-provoking, and sometimes ridiculously stupid stories.”

New York-based songwriter and author Richard X Heyman considers that “it’s one thing to have experienced a colourful and creative life, but it’s another to have the skill to write down these varied stories with wit, insight, and hilarity” like Godovitz; Canadian author and humorist agrees, adding that the book has “everything — humour, facts, pathos, and a graphic depiction of the music scene as it was.

Nor should one want to. Up Close And Uncomfortable is available now.