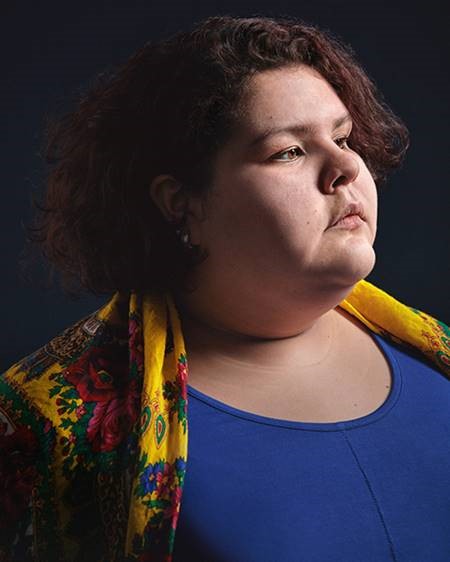 Queer, non-binary, Indigenous pop singer/songwriter Angel Baribeau – based in Cree Nation of Mistissini, Quebec – tells a tale of love and loss passed to the next generation in this, their newest video for “Wish We Were Older” — available now.

Depicting an elderly woman reminiscing with visual memories about her past, the snapshots weave through love and loss and illustrate an uplifting timeline of her life as a queer woman.

“This music video will be a recounting of a lifetime of true love between an elderly 2 spirit Indigenous couple,” director Nang K’uulas / Patrick Shannon shares of the video’s scope. It shows “the challenges, the joy, the raising of a family in a community where that isn’t common,” adds. “It’s somber, but beautiful — and a reminder that everyone can find love and bring beauty into this world.”

“Working with Nang K’uulas / Patrick Shannon was a privilege,” the Montreal-based artist shares of the experience. “He went above and beyond, and I’m so grateful. It started with a call about a concept I had in my head, and Nang made it a reality.

“It was an honour to work with so many incredibly strong Indigenous women, and to be able to spend time with them and hear about their lives and experiences.

“Nothing will ever compare to those conversations.

In addition, there were delights on-set. “Tealy made us all fry bread; it was delicious,” Baribeau shares. “And the little one, Konwaherawi was an utter joy to work with; her mother and her are a magical duo. That wass (kid) wants the stars, and they shall be hers.

“One of my favourite memories was filming in the Old Port. It’s stunning: I’m so glad we made that choice (even if we almost lost my guitar…!)

“And my dear friend Chris Robertson lent us his cabin to film in. It’s been in his family for decades, and I don’t think the video would have been nearly as successful if it wasn’t for him and his generosity; I’m glad people like him exist.

“My cousin is one of the actresses in this video,” Baribeau reveals. “But I personally didn’t know who we were casting, so you can imagine my surprise when my cousin Kenny walked in with his daughter, Mehki…

“It was an unexpected family reunion!”

“Wish We Were Older” is the latest to land from Baribeau’s recently released stunning debut, For Those I Love(d).

With the album taking a Top 3 spot on Apple Music Pop Canada’s charts soon after its Summer 2020 release, the six-track EP’s debut single “Love Is Up The River” quickly garnered more than 20,000+ streams on Spotify and hit Top 10 on the NCI FM Indigenous Music Countdown hosted by SiriusXM Canada; single “Wish We Were Older” followed its path with another ~ 28,000 streams, hit #1 on the Indigenous Music Countdown and was featured on CBC North.

“I named my EP For Those I Love(d) because I realized the songs all represented love I had or have for people that have come through my life,” Baribeau shares. “Whether they are here still, or on their own path, this project aims to honour the love I felt and feel.

“I had many Moms growing up,” Baribeau continues. “Powerful women that showed me love in the times I needed it most. My Moms gave me the tools I needed to be who I am and, in fact, they did the heavy lifting when it came to building up my own strengths. It was the women around me that taught me to be brave, to exist without apology, and to love without fear. These women were blessings and I am forever grateful for their love.”

They also nurtured Baribeau’s primary introduction to music. “My Gookum is hard of hearing but, growing up, I never saw her let that take away from her love of music. She would play her guitar even if she couldn’t hear it was out of tune, or blast her music so she could hear the lyrics. Gookum loved music because music is for everyone.

“My Mom and other women would sing me the ‘Meh Meh Sou’ chant as a lullaby, and eventually I would come to use lyrics to communicate my own emotions. Whether I was crying over someone who broke my heart, or even after breaking my own, music was always there; it has helped me through almost every stage in my life.”

Originally from the Cree community of Mistissini, Quebec, Baribeau first started through the formation of their early indie folk outfit, Simple Human Tribe. Their solo work gained momentum in 2014 when they were selected for feature on the #1 iTunes chart-topping N’we Jinan compilation album, Eeyou Istchee Volume 1.

Ultimately, Baribeau’s goal is to be that of a changemaker, noting the responsibility they feel to pursue their talent to create more representation within the industry for those who look and identify as they do.

“It’s important to see yourself in the world, and to have an image reflected back at you that accurately represents you,” they say. “To see that positive imagery is fundamental to a child; at least, it was to me. If you don’t see yourself in the world, you might come to question whether your existence is valid. I felt this way for many years while growing up and it was only when I saw more folks like me I realized it’s okay for me to take up space.

“I want to do that for others,” Baribeau continues. “In my own intersectionality, I represent so many more folks that are constantly under-represented in my communities and mainstream media. I want people to see me and know our existence is valid and needed; to feel like you’re not alone is a powerful thing.”