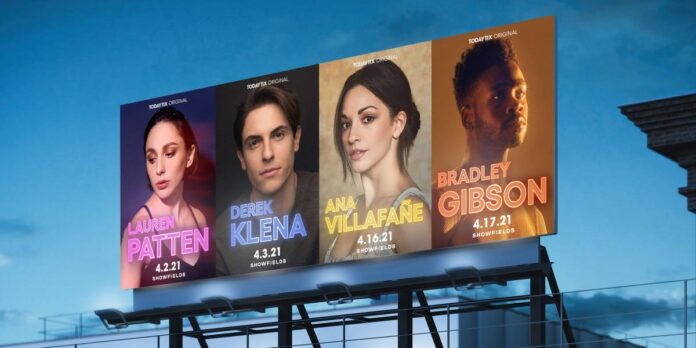 With the news that live performances can resume to in-person audiences from April, TodayTix Presents has announced a series of concerts to take place next month. The four solo concerts will take place on the rooftop at Showfields, on select dates in April.

“With the current regulations the city has set in place, we feel we can finally re-enter the live-events space successfully”, said Tony Marion, executive producer of TodayTix Presents. He continued to say: ““We are thrilled to have such a magnificent lineup of working artists to bring us back to that magic just over a year after the pandemic changed our lives forever.”

The concert series will kick off with Lauren Patten, currently playing Jo in Jagged Little Pill which recently won a Grammy Award for Best Soundtrack. She’s also starred in Fun Home, The Wolves and Days of Rage. Lauren Patten’s concert is on April 2.

Derek Klena will then perform on April 3, currently playing Nick in Jagged Little Pill. Notable Broadway credits include Anastasia, The Bridges of Madison County and Wicked.

Named one of New York Times’ “30 under 30”, audiences can see Ana Villafañe in concert on April 16. As well as playing Gloria Estefan in On Your Feet, she’s starred in TV dramas including New Amsterdam and Younger.

The concert series is rounded off with Bradley Gibson. Broadway credits include ROCKY, A Bronx Tale and The Lion King, and he’s performing on April 17.

All concerts will comply with Covid guidelines guaranteeing a safe performance. Tickets will be sold in pods of 2 or 4, with pods containing members of the same party.