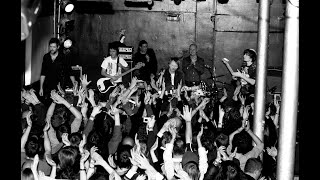 Radiohead announces a new series of archival live shows to be streamed from the Radiohead Public Library vaults. Each edition will premiere on Radiohead’s YouTube channel Fridays at 8pm BST for seven weeks beginning this Friday, the 9th of April.

The first of the new episodes will be a seldom-seen January 16, 2008 In-Store-performance-turned-impromptu-club-show from London’s 93ft East.

The January 16, 2008 show was originally intended to be an In-Store performance at London record store Rough Trade East to mark the conventional release of the In Rainbows album—a plan that went awry when hordes of fans and overwhelming media coverage caught the attention of the local authorities. The entire production had to be torn down and a replacement venue found on a moment’s notice. The show ultimately happened at 93ft East, a club with a capacity of a few hundred that was thankfully available for the night. The result was an electric and intimate Radiohead performance like no other, one largely unseen since—until now.

In other news, for a limited time Radiohead will be making available a Radiohead crew T-shirt — the same original shirts distributed to touring and local crew — with proceeds benefitting a range of stage & crew organizations supported at #WeMakeEvents. For further information visit https://smarturl.it/w.a.s.t.e and https://www.wemakeevents.com/support/