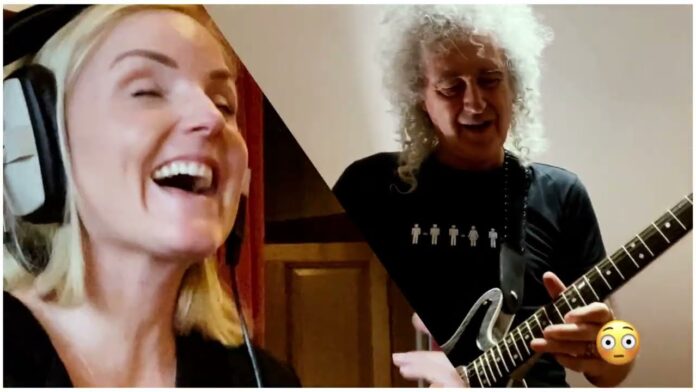 Regularly recording and performing together since he produced her first “Anthems” album, Queen’s Brian May and West End and Broadway actress/singer Kerry Ellis have come together once more for a new track created especially to bring some optimism and hope in today’s challenging times.

Brian and Kerry’s relentlessly positive new track “Panic Attack 2021” track is officially released internationally today, now available to download and stream after setting the internet alight when the pair launched it live on their Instagram feeds along  with a new music video created using the two artists’ personal iPhone footage.

“PANIC ATTACK 2021” is a bold reimagining of 2017’s Ellis/May classic “It’s Gonna Be All Right (The Panic Attack Song)” written from a personal standpoint by Brian May long before the world buckled under the heel of the Covid-19, and originally featured on the duo’s 2017 Golden Days album.

Sharing how the new version came about, Brian said: “At the close of 2020 there was a feeling that perhaps saying goodbye to that year would bring relief from the pandemic and a new era of hope would now begin. Sadly, following a very muted and restricted celebration of Christmas, the New Year dawned with the realization that the mankind’s struggle was probably going to get worse before it got better. Kerry and I realized that The Panic Attack song now potentially had a whole new meaning to literally millions of people around the world who felt a growing sense of panic. In the UK, there was definitely a feeling that we had all been cheated of our Happy New Year. So we wanted to mark the occasion in a completely real and transparent way.”

With Brian hurriedly rewriting the lyrics with a new inspiration, a work-in progress version of Panic Attack 2021 was first aired via the pair’s ambitious live link-up on Instagram for New Year’s Eve. “We knew it had to be a train wreck because the delays in this link situation make it impossible for two players at opposite ends of it to be synchronized. Nevertheless we went for it – out of sheer stubbornness really.”

With Britain now headed back into another lockdown, getting back into the studio to remake the track was impossible for many weeks. Brian finished the new lyrics and Kerry stepped up to create a new vocal performance recording on the only equipment she had – a microphone hooked up to Garage Band on her laptop in her home kitchen!

By e-mailed updates and Zoom discussions, the pair created a new Panic Attack vocal track, while assembling ideas for a new mix and ground-breaking video. Driving the whole project was a desire to create something that would actually rekindle some hope, reminding listeners that in spite of endless wrong turns – and in the words of the song – things WERE, somehow going to be ALL RIGHT !!!

Finally, after wrestling further with home recording, restrictions were relaxed to the point where Brian and Kerry were able to meet for a couple of days socially distanced work in Brian’s studio.  Long-time Queen and BM engineer and co-producer Justin Shirley Smith – himself newly recovered from Covid – worked alongside Brian on extensive new guitar work, including a wild new solo, and a dynamic mix.  In a few days, again swapping ideas with Kerry through digital media, the new track was finished.

A video ? Essential to get the poignancy of the new lyrics across.  Once again, the pair took a DIY approach – this time self-taping in their separate homes using iPhones.  The job of assembling the footage and producing the video fell to Queen’s staunch friend and prolific video producer Simon Lupton who is currently producing FIFTY episodes of  “Queen – The Greatest” – a series of video podcasts highlighting Queen’s defining moments through the years.

“Brian and Kerry’s self-filmed videos were amazing, and the perfect material for this video,” says Simon,  “but ultimately it’s the brilliance of their respective performances that shine through and make this so compelling to watch.  We were fortunate enough to have Jake McBride from Animind Studios work his magic to help highlight the energy and joy that’s bursting out of this song.”

A second video –  a remix of their original by legendary Pixar Animation Studios Stereoscopic Supervisor Bob Whitehill in response to him hearing the track – has also now become available. Says the Pixar legend:

“I loved hearing Brian and Kerry’s re-imagining of Panic Attack to signal hopeful, re-connected days ahead. In such a dispiriting and heart-breaking time, I didn’t realize how badly I needed this re-assurance from two of my favourite artists. ‘It’s going to be all right!’.

“Working with Brian to visually capture a bit of the painful journey we’ve all shared and to glimpse the joy that lies ahead, has been a blast. Hope you enjoy this “video re-mix” of what we’ve endured and what will hopefully be a much brighter tomorrow. Rock on!”

“I am beyond excited to kick off this year with a song full of hope,” says Kerry.

“Putting Panic Attack 2021 together during a lockdown has had its challenges, but that has also been the beauty of it. Music is so powerful and it’s amazing what you can still create with so many restrictions. I hope this song and video gives people as much hope and joy as it did for me and Brian making it. We have all had quite a tough year but remember: ‘it’s gonna be all right!’”

“We’ve all come through some dark times,” says Brian May. “Now we want to give hope for brighter days to come.”