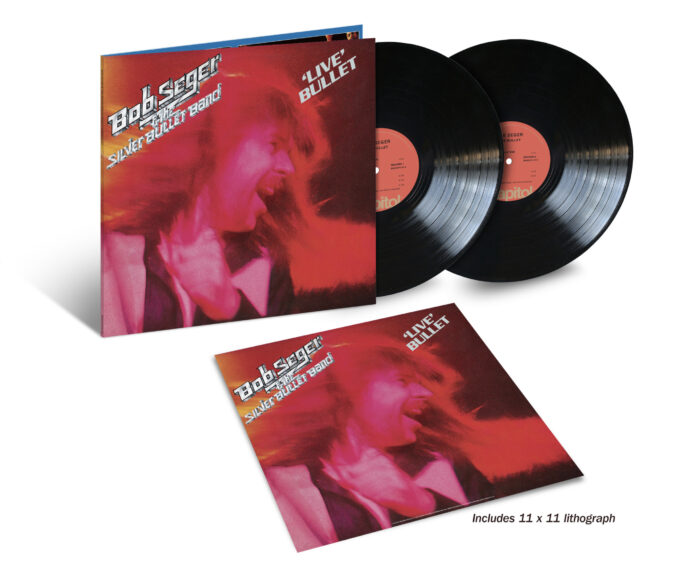 Bob Seger & The Silver Bullet Band’s ‘Live’ Bullet will be reissued in its original 2LP format celebrating the 45th anniversary of this classic album.

Hailed by critics as one of the best live records of all time, including the June 1976 review from The New York Times, “This music roars on and on until at the very end of the performance, Seger—still raring to go—bellows: ‘I’m going to rock and roll all night long.’ He means it and ‘Live Bullet’ is proof positive that he’s a living dynamo.”

Recorded at Cobo Hall in Detroit, MI, in September 1975, the original album Live Bullet brought Seger significant national attention. The recognition Seger had garnered to that point was based on two elements: the emotional power of his songs and the intensity of his live shows. Combining those two elements on Live Bullet, the album was released as a double-vinyl-record set in April 1976 and captured Seger’s riveting performances of “Travelin’ Man,” “Beautiful Loser,” “Heavy Music,” “Katmandu,” “Ramblin’ Gamblin’ Man,” “Turn the Page” and others. The album started breaking across the country and set the stage for Seger’s meteoric rise.

‘Live’ Bullet will be offered in two versions: a 2LP album in a standard version 150 gram black vinyl with a lithograph, and 2LP translucent orange and red swirl vinyl only available at independent record stores, Bob Seger’s Official store, and Capitol/UMe store. The lithograph is a reproduction of the Live Bullet cover of Seger onstage from the show taken by well-known Detroit photographer Robert Markliwitz. The album has been remastered by GRAMMY-nominated mastering engineer Robert Vosgien.

Seger’s 72 date Roll Me Away Tour was ranked by Pollstar as 2019’s #3 North American Tour, playing to nearly 1 million fans. Seger’s live performances have led to record sales in excess of 53 million albums, and 13 platinum and 7 multi-platinum RIAA Certified sales awards, including such landmark albums Night Moves, Stranger in Town, Against the Wind, Greatest Hits, Nine Tonight, and Live Bullet, all of which have sold more than five million copies in the U.S. “There is a signature richness and power to the music that Bob Seger has been making for five decades. Seger has always stayed true to his legendary sound, effortlessly marrying blues, country, and heartland soul into his trademark brand of Motor City rock ‘n’ roll. Year after year, new fans discover what longtime fans have always known, the GRAMMY Award-winning rocker’s extraordinary catalog is rich with character and passion with Seger’s compelling perspective on the world around him,”- Anthony DeCurtis.

[Note: this double LP was cut for playback on a stacked turntable spindle, which means that after Side 1 ends, the second LP drops and starts playing, technically making that Side 2. The side numbers below represent the “sequenced” side.]