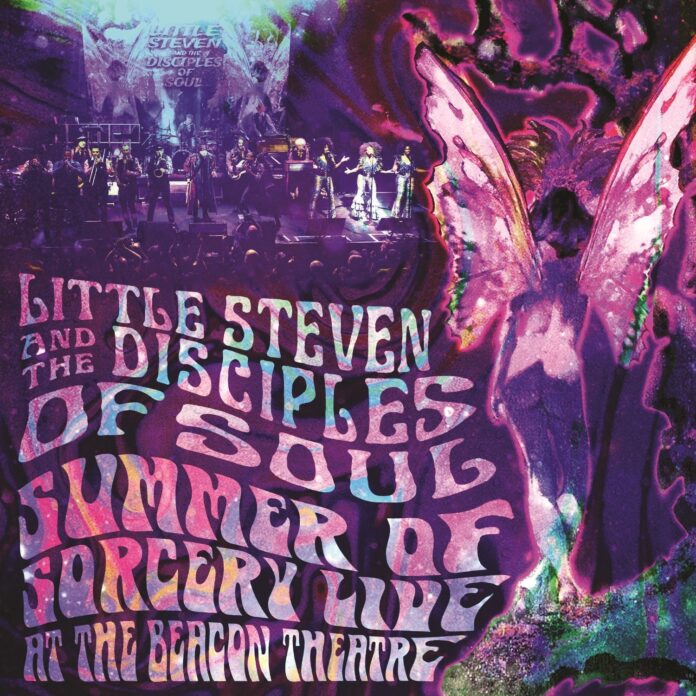 Professionally filmed and recorded before a sold-out crowd at New York City’s historic Beacon Theatre on November 6, 2019, the live concert extravaganza, Summer Of Sorcery Live! At The Beacon Theatre, expertly captures Little Steven, aka Rock and Roll Hall of Famer Stevie Van Zandt, bringing the house down with his band the Disciples of Soul as they showcase their acclaimed 2019 album, Summer Of Sorcery, a 12-track record about the first rush of summer and the electric feeling of unlimited possibilities.

With summer just around the corner, Van Zandt is pleased to announce the full two-and-a-half-hour concert – the triumphant hometown culmination of the Summer of Sorcery’s European and U.S. tours – will be released July 9 via Wicked Cool Records/UMe in a variety of formats including Blu-ray video as well as audio-only versions on 3CD and as a limited edition 5LP 180-gram “Psychedelic Psorcery Pswirl” color vinyl box set, which will be exclusively available via uDiscoverMusic and LittleSteven.com. The Blu-ray features the entire concert in HD video with the audio offered in both stereo and 5.1 surround sound to provide the next best possible experience to being at the rock ‘n’ soul revue. The live album, which was mixed by Bob Clearmountain and mastered by Bob Ludwig, both career-long collaborators, includes thrilling performances of every song from Summer of Sorcery alongside tracks from throughout Van Zandt’s solo career, songs he wrote for Southside Johnny and the Asbury Jukes, and some souped-up covers.

Summer of Sorcery Live! At The Beacon Theatre is heralded by an electrifying live video of “Camouflage of Righteousness,” available to watch now at Little Steven’s Official YouTube channel.

Little Steven and the Disciples of Soul were joined throughout the Summer of Sorcery tour by an array of legendary friends and family. Summer of Sorcery Live! At The Beacon Theatre is highlighted by a surprise appearance by the one and only Peter Wolf, who lends his inimitable vocals to powerhouse versions of J Geils Band’s “Freeze Frame” and Artists United Against Apartheid’s landmark protest anthem, “Sun City.”

Summer Of Sorcery Live! At The Beacon Theatre is rounded out with nearly an extra hour of live music featuring seven previously unreleased bonus performances recorded throughout 2017-2019, including with such superstar special guests as Australian music legends Jimmy Barnes and Peter Garrett, longtime friend and E Street Band bandmate Nils Lofgren, and the legendary Nick Gravenites, who joins Van Zandt for a spectacular rendition of the Electric Flag’s “Groovin’ Is Easy.” In addition, Peter Wolf returns for an explosive cover of The Showstoppers’ hit, “(Ain’t Nothin’ But A) Houseparty,” recorded during the Soulfire Tour but, according to Van Zandt, “too good to leave on the shelf.” The festivities come to a rousing conclusion with a star-studded version of “Sun City,” which edits together performances with Jimmy Barnes, Jake Clemons, Sam Fender, Peter Garrett, Courtney Hadwin, Garland Jeffreys and Bruce Springsteen.

“We were born freaks, misfits, and outcasts,” Van Zandt writes in the album’s liner notes, which also include personal comments about each performance. “We got into this business because no other would have us. While we were here we figured we might as well create a world of our own, because we didn’t fit in the one we were being offered. Being on the road with a band is the ultimate manifestation of that fantasy. Together you travel, you perform, you dispense joy, and you get to see the world while avoiding it at the same time.

“Such was the case with the troubadour missionaries and part-time exorcists known as the Disciples of Soul as they sprinkled enlightenment to a dark world from May 27, 2017 to November 6, 2019. First as the Soulfire was lit in the overture and finally as the Summer of Sorcery played out its magical denouement. Herein embodies the still sparkling evidence of the latter, that which began as stranger’s prayers imagined and ended as a family’s promise fulfilled. Enjoy it at as much as we did at whatever volume is required to force your neighbors to call the cops.”

Arranged and produced by Van Zandt, with production assistance by GRAMMY® Award-winner Geoff Sanoff (Bruce Springsteen, Stephen Colbert). Summer of Sorcery Live! At The Beacon Theatre kicks off with a very special introduction from counterculture icon Wavy Gravy and from there traverses across Little Steven’s genre-smashing body of work, from Summer of Sorcery and 2017’s acclaimed solo return, Soulfire through classic songs and fan favorites from the songwriter, guitarist and band leader’s illustrious career, including an incendiary three-song salvo celebrating his work with Southside Johnny and the Asbury Jukes (“Little Girl So Fine,” “Trapped Again,” and “Love On The Wrong Side Of Town“). Further highlights include spectacular covers of The Youngbloods’ “On Sir Francis Drake,” The Dovells’ “Bristol Stomp,” The Animals’ “Club-A-Go-Go,” and Bruce Springsteen’s “Tucson Train.”

Summer of Sorcery arrived in May 2019 and was immediately greeted by worldwide critical applause with Rolling Stone exclaiming, “it largely dispenses with protest songs and revels in the rock, soul and R&B of his Sixties youth,” adding it’s “the most eclectic record he’s ever made.” Van Zandt and his collaborators “pull out all the stops to make this sonic smorgasbord explode out of the speakers with passion and clout,” wrote American Songwriter. “Few artists have the artistic vision to pull off a thunderous production like this which is impressive in its scope and sheer booming audio audacity.” “A happy return for the Jersey Shore prince,” declared MOJO, while Classic Rock raved, “(Van Zandt’s) tangible labour of love defiantly captures old-school New York’s cross-pollinating melting pot with rich infusions of Latin (‘Party Mambo!’), blues (‘I Visit The Blues’), blaxploitation (‘Vortex’), classic rock ‘n’ roll (‘Superfly Terraplane’), Southside Johnny and the Asbury Jukes (‘Soul Power Twistin”) and still making a social point on ‘Education,'” adding, “This unashamed celebration of endangered music and city life also makes a great party soundtrack.” “It’s all but impossible not to be impressed by the scope of Little Steven’s vision,” wrote All Music, “and the skill with which he and his collaborators bring it to fruition…Imagine Asbury Park, New Jersey encompassing an entire musical planet and you’ll have an idea of what Little Steven & the Disciples of Soul are doing on Summer of Sorcery, and if you dig rockin’ soul, this should be right up your alley.”

Van Zandt recently announced the publication of his first ever memoir, Unrequited Infatuations, due September 28 from Hachette Books; pre-orders are available now HERE. An epic tale of self-discovery, Unrequited Infatuations chronicles the twists and turns of Van Zandt’s always surprising life, from a bedroom in suburban New Jersey in the early ’60s to the world’s largest stages in not only entertainment but activism as well. More than just the testimony of a globe-trotting nomad, more than the story of a groundbreaking activist, more than the odyssey of a spiritual seeker, and more than a master class in rock ‘n’ roll (not to mention a dozen other crafts), Van Zandt’s extraordinary odyssey shows how rock and soul has the power to change the world.

2021 has already seen the release of another live collection, Macca To Mecca!, a spectacular tribute to the Beatles available now via Wicked Cool/UMe on CD/DVD. The 14-track album/concert film – which includes a riveting performance of “I Saw Her Standing There,” recorded at London’s famed Roundhouse and featuring a special appearance by Paul McCartney – captures Little Steven and the Disciples of Soul’s extraordinary surprise set at Liverpool’s legendary Cavern Club during the band’s sold out 2017 European tour. The intimate lunchtime gig was a salute to the kind of shows the Beatles used to play in their early days when they would perform for local secretaries, clerks and shopkeepers during their half hour lunch break. Van Zandt decided to bring that unique idea back 50 plus years later for a rollicking, jam-packed daytime set filled that honored the band with rocking renditions of “Magical Mystery Tour,” “Good Morning, Good Morning,” “Got To Get You Into My Life,” and “All You Need Is Love,” alongside iconic songs famously performed by the nascent Fab Four, including “Boys” (originally by The Shirelles), “Slow Down” (by Larry Williams) and “Soldier Of Love” (first recorded by Arthur Alexander).

SUMMER OF SORCERY LIVE! AT THE BEACON THEATRE TRACKLISTINGS

BLU-RAY1. Intro: Wavy Gravy2. Communion3. Camouflage of Righteousness4. Party Mambo!5. Love Again6. Education7. On Sir Francis Drake8. I Visit The Blues9. Gravity10. Los Desaparecidos11. Little Girl So Fine12. Trapped Again13. Love On The Wrong Side Of Town14. A World Of Our Own15. Suddenly You16. Vortex17. I Am A Patriot18. Superfly Terraplane19. Bitter Fruit20. Forever21. Summer of Sorcery22. Tucson Train23. Freeze Frame (with Peter Wolf)24. Sun City (with Peter Wolf)25. Soul Power Twist26. Out Of The Darkness

3CDCD11. Intro: Wavy Gravy2. Communion3. Camouflage of Righteousness4. Party Mambo!5. Love Again6. Education7. On Sir Francis Drake8. I Visit The Blues9. Gravity10. Los Desaparecidos11. Little Girl So Fine12. Trapped Again13. Love On The Wrong Side Of Town14. A World Of Our Own

LP51. Bristol Stomp (Side A)2. Club A-Go-Go (Side A)3. Groovin’ Is Easy (with Nick Gravenites) (Side A)4. (Ain’t Nothin’ But A) Houseparty (with Peter Wolf) (Side A)5. Ride The Night Away (with Jimmy Barnes) (Side B)6. Moon Tears (with Nils Lofgren) (Side B)7. Sun City (with Jimmy Barnes, Peter Garrett, Sam Fender, Courtney Hadwin, Jake Clemons, Garland Jeffreys, and Bruce Springsteen) (Side B)