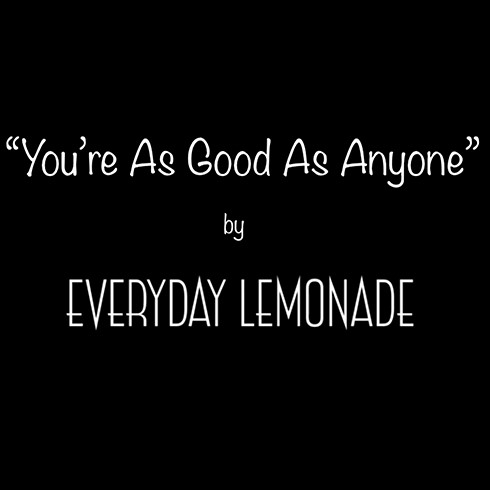 With the pandemic highlighting the importance of taking care of each other as much as ourselves, one man’s selfless effort to express gratitude to health care heroes has also inspired a group of top-class Canadian musicians. Calling themselves Everyday Lemonade, the all-star collective is honouring him with the new single, “You’re as Good as Anyone (Jordan’s Song),” and it’s available now.

It all starts with a 38-year-old gentleman named Jordan Power. In Spring 2020, Power’s mom fell ill, and was hospitalized; she made a full recovery, thanks to the incredible healthcare workers who took great care of her.

With his mom on the mend, and his June 19th birthday approaching, Power’s wish was to supply lunch to the hospital workers to thank them. With the help of his friend Donnie Blais, owner of Toronto’s Rancho Relaxo restaurant, the wish came true, feeding 400 healthcare workers in one day from Blais’ food truck.

As much as Power and the healthcare workers he and Blais fed would have liked to share hugs, COVID restrictions made that impossible. But Power didn’t know for sure if the wonderful gesture he had orchestrated with Blais was good enough, and so…

Jordan Power’s birthday wish and act of gratitude has also given one very talented, aspiring singer something to be very grateful for. 23-year-old Deacon Wayne was working as a fry cook in a London, Ontario Arby’s, and posting YouTube videos featuring his exceptional vocal talents. While Kelly and Kramer were looking for the right singer to take on the lead vocals for “You’re as Good as Anyone,” Kelly happened upon Wayne’s YouTube videos and was suitably impressed. “He has a four octave range and no formal training,” says Kelly. “Ironically, the song was shopped to many famous singers for eight months…

“But (we) decided to go with Deacon because he is also ‘As Good As Anyone’.”

“This is a dream come true for myself,” Wayne says in a recent CityTV News report. “You know, you would never think that you would have this opportunity.”

In the same report, Kramer endorses choosing Wayne to sing. “This young kid. He has the power. He really does,” Kramer says. “The range of emotion. The four octaves. I mean, he’s a complete unknown but I think, after this, he’s got a career.”

The music video for “You’re as Good as Anyone” features a heartwarming look back at Jordan’s lunch delivery to the health care workers, as well as 23 Canadian celebrities thanking Jordan personally — including Toronto Mayor John Tory, Lawrence Gowan, comedian Ron James and Goddo (Greg Godovitz). The video is also in memory of Patrick Kelly’s dear friend Paul Humphrey, lead singer for Blue Peter, who died during the making of the video.

Jordan Power’s kindness and gratitude continues to pay it forward in song and serendipity. Deacon Wayne perhaps knows that best. “I’m so humbled and honoured to be a part of it,” Wayne reflects. “And, as Patrick would say, ‘You know, you’re as good as anyone’. So, it’s just such a privilege.”

“You’re as Good as Anyone (Jordan’s Song)” is available now.