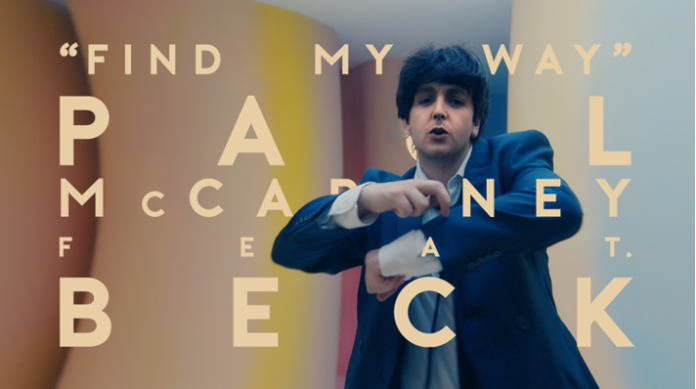 Paul McCartney’s “Find My Way (feat. Beck)” has been #ThreeImagined as a psychedelic visual trip that blurs the boundaries of time, space — and even identity.

The “Find My Way (feat. Beck)” video was co-produced by Hyperreal Digital, which specializes in the creation of hyper-realistic digital avatars. “The technology to de-age talent and have them perform in creative environments like this is now fully-realized, even with one of the most recognized faces in the world,” said Hyperreal’s CEO Remington Scott.

Directed by Andrew Donoho (Janelle Monae, The Strokes, Khalid) and choreographed by Phil Tayag (Bruno Mars, Jabbawockeez), “Find My Way (feat. Beck)” was unveiled to the world today via a global broadcast premiere on MTV Live, MTVU and across MTV’s worldwide network of channels, as well as on the ViacomCBS Times Square billboard in New York.

“Find My Way (feat. Beck)” is the opening track of III Imagined, which is released on vinyl, CD and cassette July 23.

Upon its digital release in April, McCartney III Imagined moved The New York Times to say, “Don’t take Paul McCartney’s enduring gifts — natural melody, succinctly surprising lyrics, sly chord progressions, tidy arrangements — for granted. Other songwriters don’t.” Personally curated by Paul, the album features an eclectic all-star lineup featuring Damon Albarn, Anderson .Paak, Blood Orange, Phoebe Bridgers, EOB, Dominic Fike, Josh Homme, Khruangbin, St. Vincent and 3D RDN of Massive Attack, each covering and/or reimagining their favorite moments from Paul’s acclaimed McCartney III album in their own signature styles. The result is a kaleidoscopic reinterpretation – one that serves as an extension of the instantly beloved McCartney III while standing on its own as a brilliant and adventurous milestone in the McCartney discography.