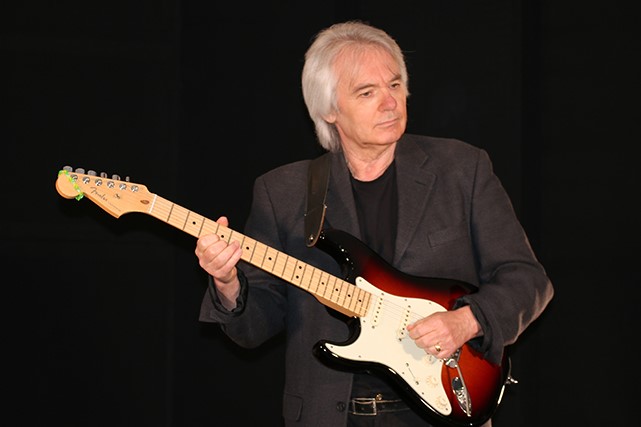 Co-written with Cyril Rawson, “Moments” is a quick and powerful, classical-inspired folk ballad which contains a myriad of beautiful acoustic guitar arrangements; it features a haunting, Led Zeppelin-esque flute melody, and endlessly visceral vocal harmonies by not just Haggarty, but backup singer Kate Suhr as well.

Because the music itself is so emotionally enticing and speaks for itself, its accompanying music video is simple and stripped back — all it really needs to be. The two-and-a-half minute short sees the Peterborough, Ontario-based musician, in all black and white, singing along in a studio, as he stares pensively into the camera’s eye.

Though Haggarty has yet to disclose exactly what inspired him to write “Moments,” his lyrics are telling and vulnerable enough to give at least a vague idea. It’s all about love, and a reflection on it — whether that be all the good times shared with a lover, or the bad; many of the branches and intricacies that, over time, managed to keep an intimate bond so strong.

Throughout the video, shots of candlesticks and old family portraits — as well as the typed-out lyrics to “Moments” — are interlaced with footage of Haggarty and the magnificent Suhr performing their hearts out in respective recording rooms of the veteran musician’s home studio: Haggarty Sound Studio.

Consider Me Undecided serves as Haggarty’s first record in more than 15 years and was born from the ambition to create a project that oozed “musical diversity.” From rock, to pop, to country and then back to folk, classical and jazz, all 13 original tracks offer something completely different for fans.

To make things even sweeter, Haggarty enlisted different session musicians, with a variety of different sonic expertise, to record the songs live in his studio. Live off the floor? Wow! Right? Impressively enough, too, Haggarty kept all the editing and post-production to a minimum, to maintain an “old school” vibe on this album.

“That’s what this project is: real live players in the studio making music,” he says.

Before kicking off his own solo career, Haggarty played guitar for the legendary Ronnie Hawkins — where he also had the pleasure of playing with Bob Dylan and the Band — as well as with The Family Brown. Come 1999, he formed his own touring band and began recording his own music. After a decade of touring solo, the multi-talented musician joined forces with Bentwood Rocker to record 1982’s Take Me to Heaven album. Haggarty was later inducted into the Peterborough Pathway of Fame (in 2013), and nominated for Guitar Player of the Year three years in a row at the CCMA’s.

As well as his brand-new solo album, Haggarty has previously released two others: If These Walls Could Talk, and Old Days.

“Moments” and Consider Me Undecided are available now.