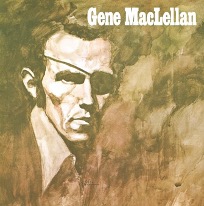 In celebration of over 50 years and officially for the first time, Juno Award winner Gene MacLellan’s version of “Snowbird” is now available on streaming services worldwide.

Gene’s version of “Snowbird” is from the forthcoming remastered re-issue Gene MacLellan which includes both the original 1970 self-titled debut Gene MacLellan and its U.S. counterpart Street Corner Preacher album.  Four singles from this 1970 debut album for Capitol Records became Top 20 hits in Canada including “The Call,” “Thorn In My Shoe,” “Isle Of Saint Jean” and “Pages in Time.”

The album also includes Gene MacLellan’s version of “Snowbird.” Previously, the song was released November 1969, and most famously, by Anne Murray on her Capitol Records debut album ‘This Way Is My Way.’ The single was released to radio as a B-side to ‘Bidin’ My Time’ (also written by Gene) April 1970, selling over 2 million copies, becoming a worldwide hit and the first Canadian written single to be played over one million times on US radio. A classic song, “Snowbird” has been covered by over 100 artists.

‘Gene MacLellan’ will be available as both a remastered digital edition and limited-edition 180 gram “white” vinyl, on February 04, 2022.

Singer Songwriter, Juno Award Winner, Canadian Country Music Hall Of Fame inductee, Gene MacLellan, the self-effacing songwriter from Prince Edward Island, wrote what is arguably the biggest hit song to ever come out of Canada, the enduring Snowbird. He also wrote the world-wide hit, Put Your Hand In The Hand, and many other beloved classics. His songs have been covered in a dozen languages and by hundreds of music icons including Elvis Presley, Bing Crosby, Joan Baez and Loretta Lynn.

In the early 1970’s you could barely go a day without seeing him on TV or hearing him on radio, from his appearances on CBC’s Singalong Jubilee, or as a guest on every music and variety show on the air. The eye patch, the hippy vests, national newspaper and magazine profiles, we thought we knew him well. And then, just like that, he disappeared.  For decades rumours swirled about MacLellan. That he was a recluse hiding on a farm on Prince Edward Island. That he had quit music, hadn’t written a song or played a show in years, that he had given away all his money. His premature death in 1995 only strengthened those rumours, media obituaries repeating them, and the stories became legends. It turns out much of what we thought we knew about MacLellan was wrong, and the reality was even more colourful and remarkable.

It’s time to dispel the myths, for fans to gather and share their stories of Gene and most importantly to celebrate the music of Gene MacLellan. Known as a quiet, modest and shy man, MacLellan wrote songs recorded by Anne Murray, Elvis Presley, Oakridge Boys and Bing Crosby. He avoided the spotlight for more intimate settings, performing instead at churches, penitentiaries and retirement homes. He has performed on gospel broadcasts, as well as provided counseling to prison inmates.

MacLellan won a Juno Award in 1970 for ‘Composer of the Year’ and received PRO Canada’s ‘William Harold Moon Award’ in 1987 for International Achievement. Gene passed away on January 19, 1995 at the age of 56, but his music lives on. In 1995 he was posthumously inducted into the Canadian Country Music Hall of Fame, and in 1996 he was given the East Coast Music Association’s Dr. Helen Creighton Lifetime Achievement Award. A 2019 documentary film produced by the National Film Board called ‘The Song and the Sorrow’ can be seen on CBC Gem, CBC’s online app. The documentary directed by Millefiore Clarkes is about Island musician Catherine MacLellan’s relationship with her father Gene and the struggle with depression both of them experienced.