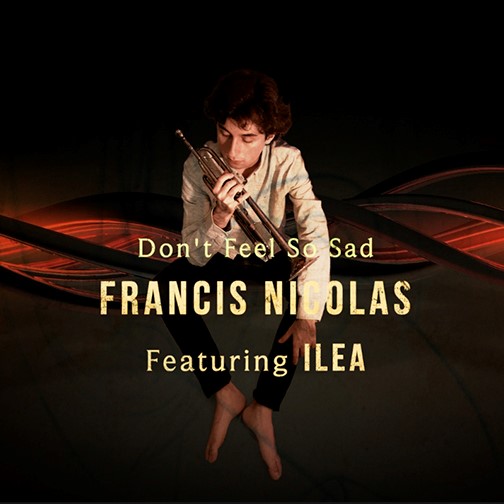 In a time when the magical medicine of music is working overtime at soothing troubled souls, beautiful songs are a prescription to be taken aurally whenever needed, and Canadian jazz-pop artist and composer Francis Nicolas has your next delicious dose with his new release, “Don’t Feel So Sad” — available now.

In “Don’t Feel So Sad,” the Montreal-based musician’s piano and trumpet melodies float over a pulsating rhythm, softly punctuated by ethereal female vocals lifting the song up into a dreamscape filled with anything but sadness. If listening to “Don’t Feel So Sad” pulls you into a cinematic and joyful experience, then that’s exactly what the young composer was intending.

“I really like movies,” explains Nicolas. “The atmosphere created by the director and supported by the music… All you need is a scene, a moment when you no longer have the impression of being a spectator, but a character in movement.”

“Don’t Feel So Sad” opens up a window to Nicolas’ personal sound lab, where the multi-talented musician composed, arranged and produced the track all on his own, out of both desire and necessity.

“When I created my song, it was a time when you couldn’t do much because of the pandemic,” he recalls. “So I created my own scenario.”

Nicolas has incorporated vocals into his compositions before but “Don’t Feel So Sad” marks the first time he is featuring a vocalist in one of his songs, and that vocalist is sought-after Montréal studio session singer, Ilea. As Ilea dreamily implores the listener not to feel sad, she also reminds us that we are not alone. It’s a simple, universal message of the power of community and the strength of our hearts when brought together.

“Don’t feel so sad.
I share my heart with you.”

Nicolas has already shared his considerable talents with us two previous singles that revealed his unique identity as a jazz trumpeter; “Gibbous Moon” and “Blue Light” were released in 2020 and earlier in 2021 respectively. “Don’t Feel So Sad” adds a new facet to this exciting young composer’s evolution.

Born and raised in Montréal, Nicolas first discovered his passion for music while playing his family’s piano as a child. While participating in elementary school harmony, he met the trumpet and it was love at first breath. So began a great adventure that has seen him grow into playing with a number of big bands, jazz combos and pop groups in and around Montréal. In July 2019, he participated in the 40th edition of the Montreal Jazz Festival with the ‘‘Ensemble Jazz de Montréal’’.