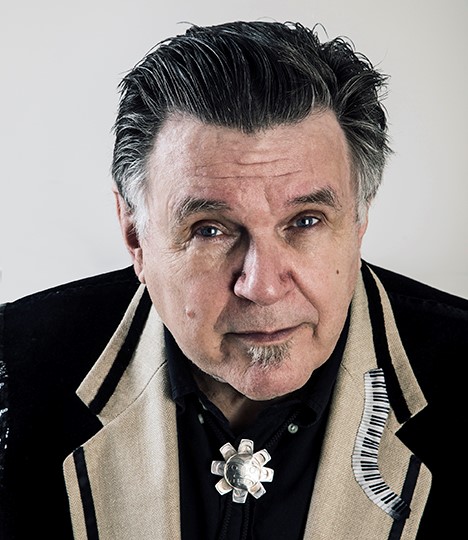 While we take tentative steps back into the electric atmosphere of our favourite live music venues, multi-award winning Canadian blues singer-songwriter and performer David Vest is here to deliver a double dose of the next best thing: not just one, but two live concert albums landing at the same time! Live at Hermann’s and Live in Calgary are both available now.

More than 18 months of pandemic lockdown has us all longing for that undeniably kinetic live music experience, and Vest is giving us a twin taste of what we’ve been missing. Live at Hermann’s and Live in Calgary feature two uniquely different performances, sets of songs and tones from the multi-talented and honoured vocalist and keyboard player recorded pre-pandemic in Calgary and in Vest’s hometown of Victoria, B.C.

However different, the two albums are unified by one distinctive theme: David Vest is truly a master of his craft.

Vest’s masterful manipulation of the black and whites is perhaps no better on display than with the featured single release from Live at Hermann’s, “Mr. Pine Top Boogie”. The jaw dropping dexterity of his fingers running up and down the keys on this grin-worthy, boogie-woogie jam have a seemingly effortless flow.

He’s been rockin’ and shoutin’ the blues since 1957 and Live in Calgary highlights Vest’s wild side, showing us what it must have been like during the early years of this genre. In contrast, Live at Hermann’s showcases the savvy showman who has sold out Hermann’s Jazz Club in Victoria over 50 times with intimate, captivating shows drawing from jazz, blues, rock and gospel, crafting a genre mix that renders each song a wholly unique and spellbinding experience.

Vest lives on the Canadian west coast paradise of Vancouver Island now, but the winner of five Maple Blues Awards including 2017 Piano or Keyboard Player of the Year started his life and art steeped in Southern boogie-woogie. Growing up in Birmingham, Alabama near Tuxedo Junction put him in the right proximity with the right talent to jam with the likes of Ace Cannon, Bill Black’s Combo, the Jimmy Dorsey Band, Big Joe Turner and to open for the legendary Roy Orbison on New Year’s Day in 1962.

He’s aptly described by veteran Canadian broadcaster, producer and Stony Plain Records founder Holger Petersen as a “huge blues and boogie talent” but, David Vest also refers to himself with more than a little tongue-in-cheek as “the world’s oldest living, promising young pianist”.

That kind of deep, rich and varied musical experience certainly deserves a first and second helping for fans to enjoy at the same time.

Live at Hermann’s and Live in Calgary are both available now.