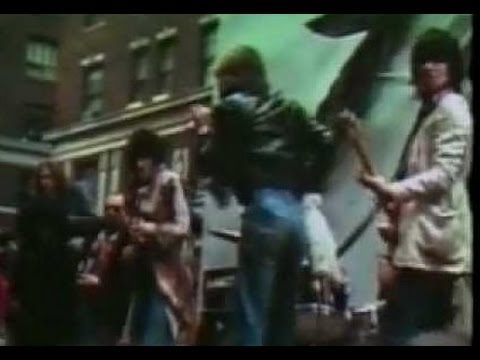 The Rolling Stones’ Tour of the Americas ’75 was a 1975 concert tour originally intended to reach both North and South America. The plans for concerts in Central and South America never solidified, however, and the tour covered only the United States and Canada.

The announcement of the tour became famous in itself. On 1 May, reporters were gathered inside the Fifth Avenue Hotel on 9th Street in New York City’s Greenwich Village to attend a press conference where the Stones were scheduled to appear. But the Stones never went into the hotel. Improvisational comedian “Professor” Irwin Corey gave a typically long-winded, nonsensical performance for journalists waiting for the Stones. The press was still listening to Corey ramble on when they finally noticed that the Stones were playing “Brown Sugar” on a flatbed truck driving down Fifth Avenue.

The handful of curiosity seekers standing outside the hotel – who’d heard a rumor of the press conference and who were hoping to catch a glimpse of the Stones entering the hotel – were instead treated to the sight of a flatbed truck rolling down Fifth Avenue carrying the Stones, their instruments and a wall of amps. The truck stopped in front of the hotel entrance and the band played an extended version of “Brown Sugar”. Charlie Watts had suggested this adaptation of a promotional gimmick often used by New Orleans jazz musicians; the idea was later emulated by groups like AC/DC and U2. After the Stones finished the song, the flatbed truck rolled down Fifth Avenue another block and the band jumped into limousines. They never attended the press conference.