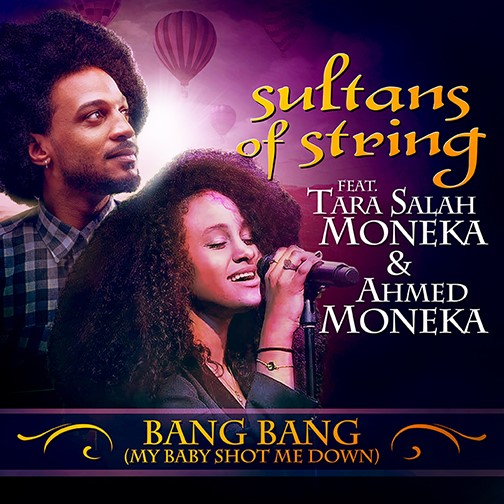 Dubbed by Maverick Music Magazine as the “very epitome of world music: no boundaries, no rules,” NY Times and BILLBOARD charting Canadian supergroup Sultans of String have released their brand-new single, “Bang Bang (My Baby Shot Me Down)” — available now.

The song features the four core Sultans, as well as incredibly talented and inspiring special guests Tara Salah Moneka and Ahmed Moneka, and arrives ahead of this November’s upcoming album, Sanctuary.

Originally written by Sonny Bono, and sung by Cher and Nancy Sinatra, this is a new take on the song that speaks to people from the perspective of marginalized voices; it is a benchmark of how the world has changed with the Black Lives Matter movement, and the thirst for equality around the world.

Toronto-based Sultans of String worked with Ahmed on their previous album, Refuge. An artist and a musician from Baghdad, Iraq, Ahmed came as an artist to Canada, and then stayed as a refugee in order to save his life towards the end of 2015. “I love what I’m doing here now, and Toronto gave me a lot of opportunity to continue my journey as an artist,” he shares. “I used to be an actor, and a lot of projects and my work focus on human rights and supporting the story that no one has told before. I came to TIFF, the Toronto International Film Festival, as a main actor in a film called The Society, and this movie was the first film talking about the history of homosexuality in Iraq, and the first film like of its kind in Iraq.

“We filmed the film, but we were scared to screen it until 2015,” Ahmed continues. “Then, the first premiere was at the Cannes festival, and it was a nice, amazing exposure to the film.

“At the same time, there was a revolution in Baghdad in the summer of 2015, with a lot of ISIS in the North of Iraq, and people fighting. There was crazy chaos. Several people, like the open minded people, were taking over. So I was part of the revolution as well.

“And then, in September, I came to Toronto, and TIFF were screening the film. They made a big exposure of this film; they went to my father because my father is very well known as an actor in Iraq, as well, and told him ‘hey listen, if Ahmed comes back, we’ll cut his body into little pieces, so you’re not allowed to come back, let him stay in Toronto’.

“I was exiled, literally, from my country, and that was really crazy. I started my journey without knowing any English, and then started learning in an ESL school as a political refugee, in a new country, and that’s why I ended up in Toronto.”

It was just this past year that his super talented younger sister Tara, and the rest of his family, would join him here, with an emotional greeting at the airport in the midst of the COVID 19 pandemic that risked derailing the entire settlement process. She was also forced to flee the country with her parents after receiving multiple threats from militiamen against her singing. To them, Tara’s music is considered forbidden (haram), and would see them shutting down events where she would appear, and directly threatening her life.

The whole arts community of Toronto and Canada is so grateful for their presence here. “Ahmed and Tara are amazing individuals,” Sultans of String bandleader Chris McKhool says. “They are so strong, and full of hope for a better tomorrow.

“And I think, in a way, they teach us to be better Canadians by seeing our country through their eyes!”

“Toronto made me a musician, to be honest,” Ahmed shares. “I have African heritage, so that made me know how to play drums. When I was still young, we sang as a ceremony, a ritual thing, the family. And then, without knowing how to speak and to communicate with people, I felt that music is the best way to share and express myself.

“Love is the main reason for a great future. And I feel the privilege of art, and this amazing collaboration happening, like what’s happening in this album, is in home and nationalities. How many people, how many different backgrounds… Toronto makes you feel like you’re not a stranger because it’s based on immigrants.”

Since his arrival, Ahmed has certainly ingratiated himself to his adopted country, and has collaborated with many artistic institutions including the Canadian Opera Company, Tarragon Theatre, Aga Khan Museum, Tafelmusik, Driftwood Theatre Group, Toronto Jazz Festival, Koerner Hall and many others. He is one of the founders of the band Moskitto Bar and is the creator and leader of Moneka Arabic Jazz — a 2019 Stingray Rising Stars Winner at the Toronto Jazz Festival. His sister Tara seems to be following in his footsteps and becoming a key player in the local arts scene.

And continuing to teach us about how to be better people.

Tara Salah Moneka & Ahmed Moneka will also be appearing on BACKSTAGE with Sultans of String, a free livestream broadcast at www.facebook.com/sultansofstring that features in-depth connections with guest artists, fan interactive conversations, video premieres, and up close and personal interviews with the artists, discovering their stories behind the songs that include tales of both struggles and success, and of course live music.

Sanctuary is the highly anticipated eighth album from Sultans of String, and the second instalment in their Refuge Project. The first, simply entitled Refuge, was heralded as “a fantastic, moving, dreamlike, epic, timely album.” – Ken Micallef (Jazz Times, Stereophile, Downbeat) and won many awards including Producer of the Year at the 2021 Canadian Folk Music Awards for bandleader and violinist Chris McKhool.

This ambitious, diverse, inclusive and passionately political album puts the band face-to-face with a VIP roster of global ‘ambassadors’, some of whom are recent immigrants and refugees to Canada, as well as important Indigenous voices. All are masters of world music that communicate with each other through the global language of music.

Addressing the struggles of life on Mother Earth has always inspired Toronto-based quintet, Sultans of String. On Sanctuary, Sultans of String bring their unique brand of musical synergy and collaboration to bear on 11 songs that speak to the challenges facing the world’s displaced peoples–their stories, their songs, their persistence and their humanity.

Joined by an international cast, some of whom are recent immigrants to North America, the celebrated quartet immerses themselves in the plight of the international refugee on Refuge, and the humanitarian response that should greet everyone in search of a home.

“The larger Refuge Project is centred around the positive contributions of refugees and new immigrants to Canada,” McKhool explains. “We are bringing in special guests that are newcomers to this land, as well as global talents that have been ambassadors for peace. We wish to celebrate the successes of those who make the journey here, and bring their extraordinary talents with them, in this case music. Each one of us has a remarkable story to tell, and we are excited to share the beauty of these collaborations with you.”

It also includes three stunning new versions of songs off Refuge. These include an astonishingly gorgeous orchestral version of The Power of the Land featuring Indigenous performers Duke Redbird and Twin Flames, Turkish mega-pop star Suat Suna singing Hurricane, and flamenco dancer and singer Tamar Ilana singing a version of Asi Soy that will rip your heart out.

Thrilling their audiences with their genre-hopping passport of Celtic reels, flamenco, Gypsy-jazz, Arabic, Cuban, and South Asian rhythms, 3x JUNO Award nominees and 3x CFMA winners Sultans of String celebrate musical fusion and human creativity with warmth and virtuosity. Fiery violin dances with rumba-flamenco guitar, while bass and percussion lay down unstoppable grooves. Acoustic strings meet with electronic wizardry to create layers and depth of sound, while world rhythms excite audiences to their feet with the irresistible need to dance.

Since releasing their debut album Luna in 2007, Sultans of String have continually strived to make each chart-topping album more original and meaningful than the last. That includes working with an orchestra (2013’s Symphony), teaming with Pakistani sitarist Anwar Khurshid (2015’s Subcontinental Drift) and even crafting a world-music holiday album (2017’s Christmas Caravan), which landed them on the Billboard charts and the New York Times. Their ambition and work ethic have garnered them multiple awards and accolades, including three JUNO nominations, first place in the International Songwriting Competition (out of 15,000 entries), three Canadian Folk Music Awards and countless other honours, plus a Queen’s Diamond Jubilee medal (for bandleader Chris McKhool). Their 2020 release Refuge garnered many awards including two Independent Music Awards for Instrumental Song of the Year and World Music Producer of the Year, two songwriting awards from Folk Music Ontario, as well as the 2021 CFMA for Producer of the Year for Chris McKhool and John Bailey.

McKhool has an Egyptian-born mother who happened to play piano, teach classical theory, and feed her young son as much Middle Eastern cuisine as she did music lessons. From there, the powerful violinist developed a taste for multi-genre string sounds and found a like-minded crew of all-world enthusiasts. When McKhool first heard founding guitarist Kevin Laliberté’s (Jesse Cook) rumba rhythm, their musical synergy created Sultans of String’s signature sound – the intimate and playful relationship between violin and guitar. From this rich foundation, the dynamic duo grew, featuring such amazing musical friends as in-the-pocket bass master Drew Birston (Chantal Kreviazuk), and the jaw-dropping beats of percussionist Chendy Leon.

Bang Bang (My Baby Shot Me Down) is available now in standard stereo as well as Dolby Atmos. Sanctuary is available November 10, 2021.