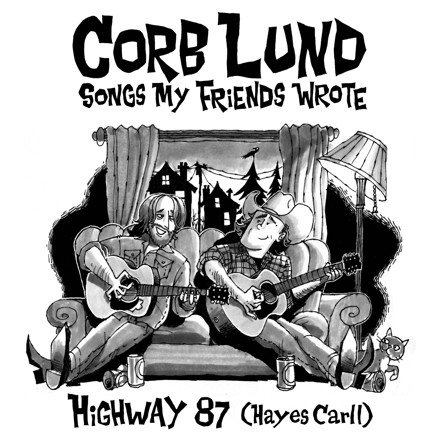 Fresh off his CCMA Award win to close out 2021, Corb Lund has announced a new album, Songs My Friends Wrote, scheduled for release on April 29. Lund puts his spin on 10 songs that were written by some of his closest pals and world-class songwriters such as Ian Tyson, Hayes Carll, Todd Snider and more.

“Songs My Friends Wrote is an album I’ve been threatening to make for years,” says Lund. “In most cases I’ve picked relatively obscure songs that have always spoken to me, even though many of them won’t be so familiar to people. The best part about recording all these tunes was that they reminded me of all the people who I haven’t been able to hang out with for the past two years because of the plague we’ve all been dealing with. All of these tunes bring a smile to my face and I hope they do the same for you.”

“I’ve known Hayes forever. We met at a card game in Dauphin, Manitoba, many moons ago and we both lost all our money to my ex, Debbie. Hayes and I have toured together, written together, drank together and he’s one of my best friends in music. This song is one of his that’s older and not as widely known, but my guys and I have been playing it for years. I love it.”

Lund’s completely sold-out cross-country tour has been rescheduled to now begin in April. Lund will perform intimate shows at small clubs to help bring people back into venues that have been empty for nearly two years.

Corb Lund has received multiple CCMA, JUNO, and international award nominations and wins. A rural Albertan hailing from the foothills of the Rocky Mountains with a long family lineage of ranchers and rodeo people, Lund is about as authentic as they come. Embracing both his Western heritage and his indie rock past through his music, Lund has been known to filter a range of cowboy themes past and present through his unique lens – from rough-and-tumble tales of lawless frontier saloons to the somber realities of running a modern family ranch.

Most recently, Lund has been actively leading protests against the Alberta provincial government’s plan to allow open-pit coal mining on the eastern slopes of the Rocky Mountains. Last fall, Lund re-released “This is My Prairie,” featuring some of Alberta’s biggest country artists, which some are calling an anthem for the fight against coal.