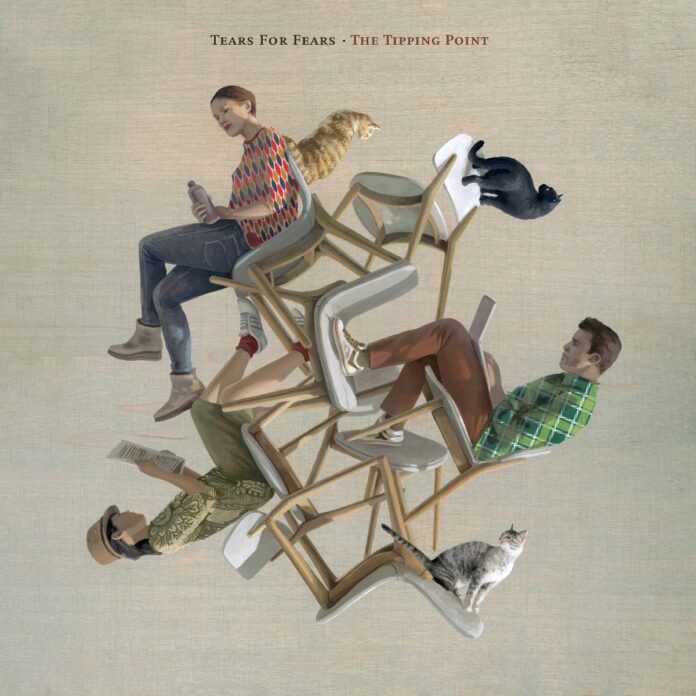 Today, iconic British duo, Tears For Fears, have released Break The Man, the third single off their highly anticipated first studio album in 17 years, THE TIPPING POINT, arriving February 25, 2022 via Concord Records. Co-written by Curt Smith and Charlton Pettus, and co-produced by Curt, Roland, and Charlton, the band has crafted an empowering yet groovy track, with the overarching message being to break the patriarchy.

Of the song Curt says, “‘Break The Man’ is about a strong woman, and breaking the patriarchy. I feel that a lot of the problems we’ve been having as a country and even worldwide to a certain degree has come from male dominance. It’s a song about a woman who is strong enough to break the man. For me, that would be an answer to a lot of the problems in the world – a better male-female balance.”

In October the pair released the first single & title track, The Tipping Point, capturing the grief of watching someone you love lose their long-standing battle with disease. Their second single, No Small Thing, was a meeting of the minds as the pair went back to the drawing board and found the heart and soul that would complete the album. The accompanying video was made using solely found footage showing the conflict between individual freedoms and collective responsibility. The Tipping Point is the bold, beautiful and powerful sound of Tears For Fears finding themselves together, once again.

In November, the band also announced THE TIPPING POINT WORLD TOUR, with support from Garbage on the U.S. leg. Kicking off in Cincinnati, OH on May 20th, 2022, these dates will see the band performing in over twenty cities across North America before capping off with their last show in Wantagh, NY on June 25th, 2022. These dates will mark the band’s first U.S. tour since 2017. See below for a full list of dates, and for tickets and more information, visit the band’s website.

With 30 million albums sold worldwide, performing to countless sold-out audiences, and winning various awards, the band represent an inimitable intersection of pop palatability, clever and cognizant lyricism, guitar bombast, and new wave innovation. Their 1983 debut, The Hurting, yielded anthems such as Mad World, Change, and Pale Shelter, reaching RIAA Gold status in the United States. 1985’s Songs from the Big Chair became a watershed moment for the group and music at large. Boasting the signature BRIT Award-winning, Everybody Wants to Rule the World, Shout, Head over Heels, Mothers Talk and I Believe (A Soulful Re-Recording), it went quintuple-platinum and captured #1 on the Billboard Top 200. Slant dubbed it one of The Best Albums of the 1980s, it was featured in the book 1001 Albums You Must Hear Before You Die, and Consequence of Sound awarded it a rare A+ rating in a 20-year retrospective. 1989’s Seeds of Love proved to be Orzabal and Smith’s last collaboration together until Everybody Loves A Happy Ending in 2004, which rekindled the creative fire between them. The band engaged in a three-year touring whirlwind across North America, Japan, South Korea, Manila, and South America beginning in 2010. 2013 saw them return with their first recorded music in a decade: a cover of Arcade Fire’s Ready to Start. The band returned once more in 2017 with the Rule The World best-of collection which once more catapulted the band back to the upper echelon of the UK album charts. The duo’s DNA remains embedded within three generations of artists on both subtle and overt levels. Quietly casting a shadow over rock, hip-hop, electronic dance music, indie, and beyond, Kanye West interpolated Memories Fade on The Coldest Winter from the seminal 808s & Heartbreak, The Weeknd infused Pale Shelter into Starboy’s Secrets, David Guetta sampled Change for Always, and Drake utilized Ideas as Opiates as the foundation for Lust For Life, while Ally Brooke Hernandez, Adam Lambert, and Gary Jules recorded popular covers of Mad World and Disturbed took on Shout, and that’s only to name a few. Lorde cut a haunting cover of Everybody Wants To Rule The World for the soundtrack of the blockbuster, The Hunger Games – Catching Fire, which Tears For Fears gleefully would use as intro music live and thus bring everything full circle. In 2021 the band were honoured with the Outstanding Song Collection Award at the Ivor Novello Awards.

With The Tipping Point and comprehensive touring plans on the horizon Orzabal and Smith remain as loud as ever, while yet another generation gets ready to “Shout” with them all over again.