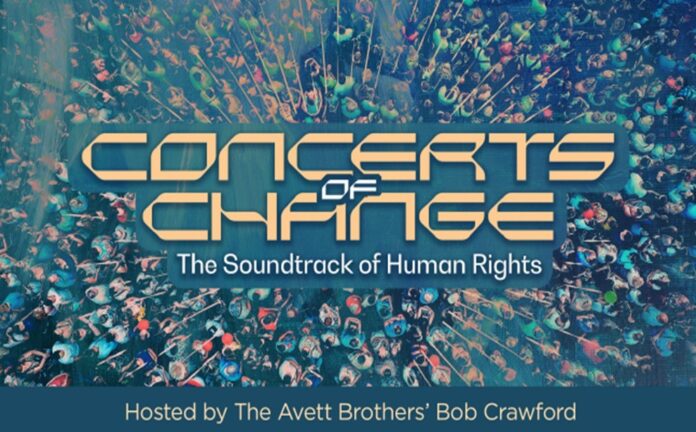 SiriusXM announced today the launch of a new original series, Concerts of Change: The Soundtrack of Human Rights, hosted by Bob Crawford, bassist of The Avett Brothers. This new audio docu-series will debut on March 22, exclusively on SiriusXM on the Volume channel, with additional content available on the SXM App.

Musician and historian Crawford hosts this all-new series that explores the 1970s through the 1990s, when benefit concerts and artist activism sparked a new era focused on human rights. From George Harrison’s The Concert for Bangladesh to Live Aid, Sun City, and Amnesty International’s concerts, Crawford explores the soundtracks and the legacy leading to these events, and how they remain impactful today. Featuring interviews and candid conversations with Bono, President George W. Bush, Bob Geldof, Joan Baez, Steve Van Zandt, Jackson Browne and other artists, politicians, and journalists, Concerts of Change showcases the music that defined history and dives into the politics that sparked it.

“Concerts of Change has been a real passion project for me,” said Bob Crawford. “The impact these concerts had on my life–not only musically but as an activist and historian–have continued to be an inspiration for me today. We’ll take a look at how musicians in the 1980s tackled human rights, racism and the impact of living in the shadow of the Cold War. All issues that are relevant again today.”

“We’re excited to partner with Bob on this new docu-series where he gets to explore the things he loves–music and history,” said Roger Coletti, Executive Producer of SiriusXM’s Volume channel. “We can’t wait for our audiences to jump right into this series that explores pivotal moments in time, through Bob’s insightful conversations with an all-star lineup of artists and activists.”

Concerts of Change: The Soundtrack of Human Rights kicks off on March 22 at 1 pm ET, and will air bi-weekly on SiriusXM’s Volume channel 106. Listeners will also find extended bonus content with lengthier interviews and outtakes, exclusively available and streaming anytime on the SXM App beginning March 22.

SXM Media, SiriusXM’s combined sales organization, has exclusive global ad sales rights for Concerts of Change: The Soundtrack of Human Rights. Access for brands and marketers is only available through the advertising and sales arm of SiriusXM, Stitcher and Pandora.