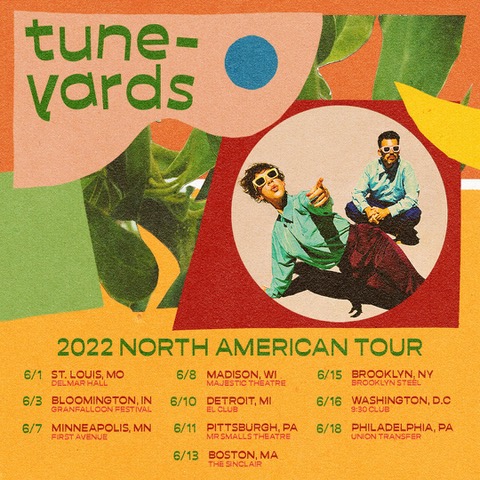 Tune-Yards announces their first East Coast and Midwest tour dates in support of their critically acclaimed album sketchy. that was released in March 2021 on 4AD. The June US tour dates follow the band’s 2021 West Coast run.

Tune-Yards have partnered with PLUS1 so that $1 from each ticket will benefit the PLUS1 Ukraine Relief Fund, supporting the people of Ukraine through effective grassroots nonprofits providing humanitarian aid, refugee support, and access to critical information.

Tune-Yards’ fifth studio album, sketchy. balances self-inspection and reflection with bombastic rallying cries, reminiscent of the furious tones of early days Tune-Yards. The result is a colorful and joyous record with lyrics that cut to the bone across its 11 tracks. To celebrate the album, Tune-Yards performed its songs on The Late Show with Stephen Colbert, Jimmy Kimmel Live! and CBS This Morning: Saturday.