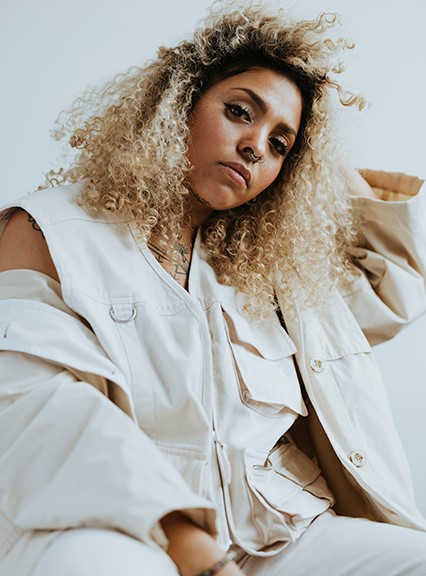 Hip Hop soul-R&B artist MODLEE ushers audiences on a sound journey like none other with the release of her new album, SOUL URGE — available now via Disques 7ième Ciel.

Marking her arrival as the first female artist to sign with the label, the release is the fruit of a visionary, one-of-a-kind co-production alongside producer, DJ, and long-time collaborator, Vlooper.

A hymn to beauty, growth, and surrendering to your inner desires — the desires of the heart and soul — the LP shares stories tinged with inner healing and bearing a message to the other.

The album pulses on the foundations of its hip-hop and electro influences before soaring into the expansion of soul fusion styles; SOUL URGE immerses you in a parallel universe of Rhythm and Blues and lulls you with MODLEE’s velvety vocalizations and imagination.

With roots in Quebec and Jamaica, as well as frequent travel to the U.S., MODLEE has been greatly influenced by jazz, soul, R&B, gospel, and reggae. Dynamic in range, her signature style is suffused with personal tones and tends to touch on topics such as spirituality, community, feminine strength, and other values that are at the core of who she is.

Weaving together musical styles that have long been marginalized in Quebec throughout her singular journey, such as hip-hop and R&B, MODLEE continues to be a dynamic force contributing to the scene’s rich cultural diversity.

Having worked in the music industry since 2009, her wealth of experience has positioned the acclaimed singer as a source of positive inspiration that embodies what it means to be a positive role model, have a seat at the table, and express yourself in a distinctive, authentic voice.

Her release roster includes her breakthrough 2010 debut EP, ANALOG LOVE, her 2017 opus, Queendom Mix Tape, as well as the SUNWALK project from the Californian label Soulection, and a multitude of collaborations — including with rapper Eman on “Back to Me,” Alaclair Ensemble on “436,” rapper KNLO on “FANTAISIE,” and more.