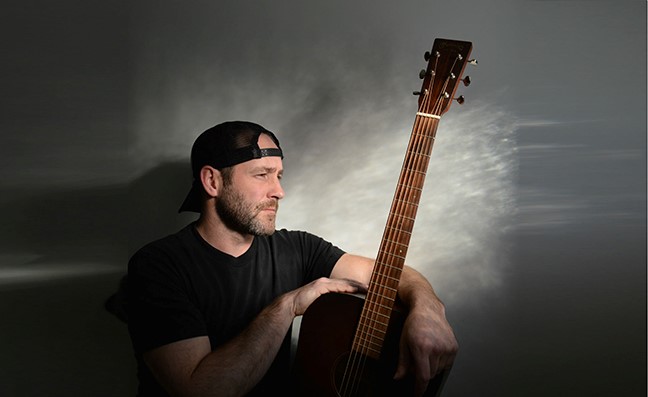 The world has just been through two years of overwhelming uncertainty and isolation with many lives lost, connections broken, and dreams put on hold. Owen Sound singer-songwriter Morgan x Barrie took the world’s suffering, buckled down in depths of the pandemic and made it into something resonant, open hearted, and beautiful for us all with his new album, Lines, and the single “Germany.”

That said, Lines, Barrie’s third full album, isn’t a lament over our recent past… Instead, it’s a raw and honest look at the challenges all generations collectively face in the 21st century; a deeply thoughtful exploration of human hot topics like love, waste, and loss approached in equally passionate terms.

“I wanted to write an album I would want to listen to,” says Barrie, matter of factly.

But Barrie didn’t just ‘write’ this album; Lines is truly a creation all his own volition as he is the songwriter, composer, producer, and engineer — seeing the project through from his imagination to your ears. He writes, composes, records, and mixes all the music in his living room in Owen Sound, Ontario, immersing himself in the pursuit of the right sound reminiscent of Brian Wilson’s legendary musical isolation periods. The result is sonically rich, personal yet relatable, and wholly hard to believe it originated from the artist’s living room and not multiple recording studios.

In the making of this album, one important thing Barrie wanted to listen to be the voices of his past.

“The album started with the song ‘Germany’ — a tribute to my connection with my grandfather and his experience storming Juno Beach on D-Day,” explains Morgan. “I wrote the song after returning from touring Germany, which gave me the opportunity to reflect on how different my experience was in Europe then his would have been.”

“Luckily, I was able to find original audio clips that capture him sharing some of his experience at Juno Beach,” he recalls. “When I hear his voice on the song, all the memories come rushing back.”

Unearthing that treasure of his grandfather’s recordings talking about his WWII days brought his experiences so much closer to home for Morgan in writing “Germany.”

“I was fortunate enough that he was able to share some of his darker, more intimate experiences of the war. Through the tears and the pain, it solidified a bond between us that is unique and part of what makes me who I am today.”

Just like the many ways we humans are connected, the nine tracks on Lines are tied together by transitional audio passages of streetscapes, natural environments, crowded rooms, snippets of conversation, and instrumental flourishes — from subdued to bombastic — that create a seamless experience as the listener follows, willing and intrigued.

Lines is an ambitious concept album that whisks you on an epic, heartfelt journey through the human struggle to make sense of our place in the world around us. Barrie’s rough and tumble, worldly-wise voice is the narrator through contemplative acoustic moments like “Adrift” to full-on roots rockers such as “Strange Days.” In a world of single song servings, Lines is meant to be a full course experience.

Prior to Lines, Barrie released his debut solo LP, North, in 2017 and piqued enough interest to perform several sold-out shows and strengthen his growing music community. Following that, Barrie released Fall in 2018.

Songs from Fall garnered Top 10 placings with CFRC Kingston and airplay on CBC North, as well as praise from international music critics; this success helped Barrie secure an opening slot for Matt Epp on his 2018 European tour. Barrie followed that up with a fully booked three-week tour through Germany and Switzerland in 2020 that was unfortunately postponed as the global pandemic took hold.

Barrie officially released Lines at one of the premier live listening rooms in the Georgian Bay area, the Heartwood Music Hall, and more shows will be on the way in support of this new release.