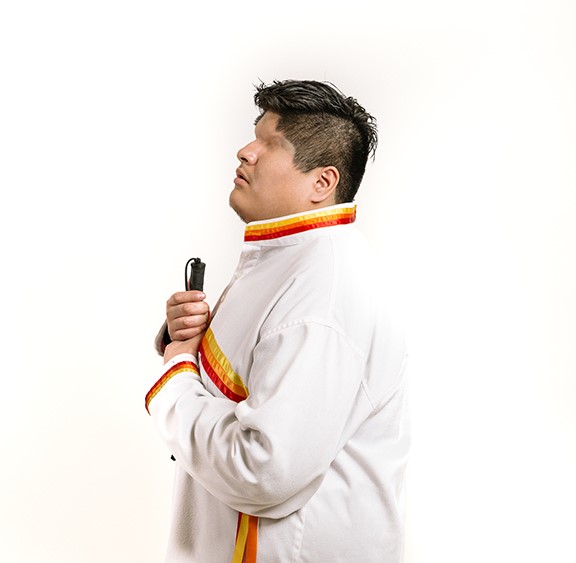 There are few things in this world as cold as isolation… And Mattmac’s ambition to bring warmth to such a dark concept is what makes his newest hard-hitting rap single, “Isolation,” so powerful.

As Mattmac’s music has always showcased, life isn’t always as easy as “point A to point B;” in fact, it’s a long and self-conscious road of struggles. Mattmac’s ability to express his grievances in such a vulnerable and heartwarming way is what makes his music so special. Add the fact that he was born blind into the mix and you’ve got a fairytale story of rags to riches.

“Isolation” encapsulates that messaging perfectly. As a music producer located in the rural area of Garden Hill First Nation on a Canadian Reservation, Mattmac found himself struggling with a lack of fundamental resources — like he was set up to fail from the beginning.

“I’ve been able to achieve some of my goals and build some demand for my music and skill sets, but the pressure has been building up,” he reflects on the feeling. “The lack of fundamental resources on my reserve has not only been frustrating and challenging but has made me realize that where I’m from is set up for people to fail.

“This feeling has left me feeling really isolated,” he continues. “I’m disconnected from the world that is calling upon me, but still doesn’t reach out in a way that helps people who desperately need change.”

While “Isolation” is a traditional trap production, the lyrics portray a story of hardship and separation. Mattmac’s story draws the listener in, sharing the weight of the world with them for a moment of respite. Deep 808s and atmospheric ad-libs add to the lingering sense of dread as options start to run dry and the situation becomes make or break.

“What’s really interesting is that so much has changed in the past six months since I wrote ‘Isolation,’” he shares. “I’ve been able to find an apartment in Winnipeg, and recently moved in; I was able to go back to Garden Hill a week before I moved, and it was a really emotional time for me…

“Just thinking about all the struggles and challenges I faced with my family — to think I made it out and I am now starting my own life… It’s really a lot for a kid on the reserve.

“A kid like me didn’t know if it would be possible.

“I’ve had a lot of support in the last few years, and that has made all the difference,” he continues. “My hope is that more kids can get that kind of support for their dreams and goals. I am still young, but this whole journey has made me start to think and plan about how I can contribute to that change.”

This powerful single is the third release connected to Mattmac’s upcoming album, BLURRED VISIONS, which is set to release just before the summer. “Isolation” also has its own stand-alone music video, produced by Indigenous filmmaker Skye Spence.

“We are working on a digital series of themed videos set to release over the summer and a documentary film called ‘FEEL THE WORLD’ — set to release next year — that takes a closer look at my life over the last few years.”

Mattmac is a blind music producer and recording artist from Garden Hill First Nation, Manitoba. Mattmac was born blind, and, at a young age, he struggled with depression. Growing up surrounded by music, Mattmac quickly found it to be an effective coping mechanism and took to singing in his community’s gospel choir.

From there, he started making beats and writing songs, teaching himself how to play piano and guitar along the way. He attributes his competencies to the support of the Bling & Famous group — a USA-based collective of blind music artists who collaborate and connect with one another through the internet.

Mattmac debuted his entry to the music scene in 2016 when N’we Jinan, a travelling music studio program, visited his community and invited him to collaborate on a project. Pulling inspiration from his personal story, they created a song and video titled “Help You See” that has received over 250,000 views on YouTube and Facebook. From there, Mattmac has connected with international artist Nelly Furtado and performed alongside her at Indigenous day Live and We Day Canada Day in 2017; they continue to work together.

Mattmac hopes to continue to use his platform to inspire others to know that they can accomplish anything they set their mind to.