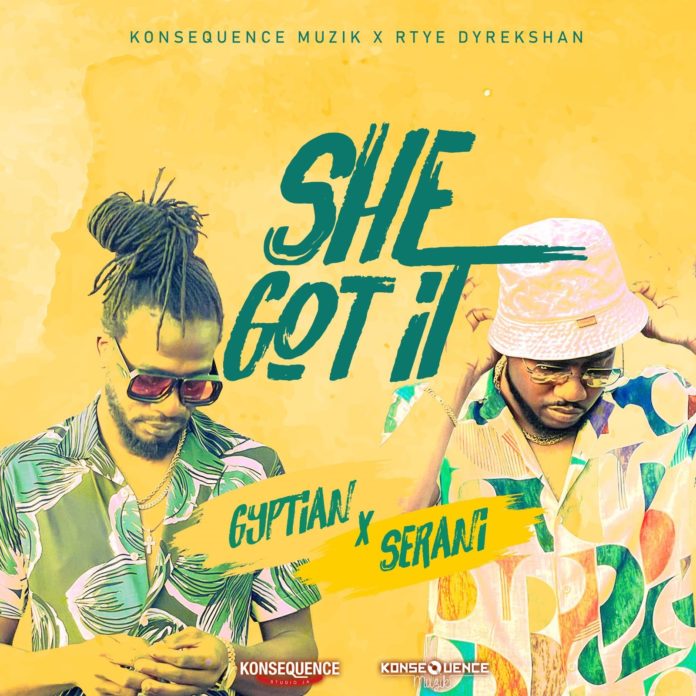 We may be barreling towards winter, but Gyptian and Serani are still dropping heat to keep you dancing with their newest dancehall smash hit, “She Got It.”

“She Got It” is a feel-good banger meant to infect listeners with inescapable urges to dance and pull a partner close. The composition and production of Gyptian and Serani’s work is professional at best, with “She Got It” serving as proof that you can mix business and pleasure.

“The beat sounded happy and Gyptian and I went straight to vibing,” Serani recalls as he looks back on the production process. “We went in the studio with a direct plan to make a song for our fans. We thought it be great doing a happy party song for them.

The group worked alongside Tahj Chief engineer at Konsequence Studio, who provided the foundation upon which Gyptian and Serani crafted a seemingly perfect party anthem.

Gyptian talks about the group’s time together, saying “Tahj Chief engineer was in the studio working on a beat; just a regular night doing music when a few ideas started coming to him. It wasn’t long before Platinum recording artist Serani walked in on the session.”

Gyptian continues his praises for Serani, saying “We all know he’s no stranger to productions, so we asked for his input towards the beat. From there the rest is history.”

While Gyptian and Serani’s chemistry together is undeniable, the two have prolific music careers.

Gyptian was born Windel Beneto Edwards in King Weston district in the parish of St. Andrew. Driven by his parents to pursue his passion for music, Gyptian was sharpened his vocal skills at small concerts. Gyptian first stepped into the limelight with the release of his 2005 mega hit, “Serious Times, making it as the biggest reggae hit of 2005/2006. Gyptian was nominated as Best New Reggae Artist and Named World Music Awards held at New York City’s legendary Apollo Theater.

At home, Gyptian was cited as the Best New Artist of 2005 by the Jamaica Observer newspaper, and “Serious Times” tied with Damian Marley’s “Welcome to Jamrock” for the Daily’s Song of the Year honors.

Gyptian has released other smashing hits such as “Keep Your Calm,” “I Can Feel Your Pain,” and “Love Against The Wall.” Driven by a desire to bring back the reggae market, saying “Since the Bob Marley days, no reggae artist really go out and sell a million copies. So, I am trying to bring life back to reggae music – Bob Marley was just a man like me so I use him as a landmark for what I am trying to achieve.”

Craig Serani Marsh, known professionally as Serani, was born in Kingston Jamaica. Serani’s musical journey started as a child when his mother bought him a melodica, known as “the blown organ,” after he was influenced by Reggae legend Augustus Pablo.

Serani found success in the Jamaican music scene during the mid-2000s, co-producing hits such as Sean Paul’s Billboard-topping “We Be Burning” and Tony Matterhorn’s “Dutty Whine” – the head-spinning, waist-whining dance immortalized by Beyonce and arguably one of the internet’s first viral challenges.

Serani went on to oversee the production for Dancehall icon Mavado in the Gully God’s formative years. A duet with Mavado led to the release of “Dying,” a Dancehall smash that charted on Mavado’s debut album Gansta for Life: The Symphony of David Brooks. The song was also sampled for Drake’s mega-platinum album Views on the song “9.”

A slew of Dancehall staples such as “Skip to My LuLu,” “Doh,” “Study People” and “Stinking Rich” led to an album deal with JVC in Japan and quickly established Serani as one of Jamaica’s top acts, sending him to become a major player in the genre for the last decade.

It wasn’t long before Serani struck gold on his own as an artist with the timeless Dancehall classic “No Games,” his biggest hit to date. It crushed the Billboard Hit R&B/Hip-Hop chart and led to him signing with Universal Records before settling into a joint venture with Phase One Network, a New Your-based label. To this day, “No Games” is a constant feature across US clubs and radio, present on iTunes and Spotify curated playlists.

In 2019 Serani received another major career boost as his track “Secret” was featured on Afrobeats superstar Burna Boy for his album African Giant. It also featured US star Jeremih and continues to have stadiums singing the track word for word wherever Burna performs.

Serani is currently working on several albums across different genres. He is determined to see his career continue to grow.

“My mission is to really get the world looking at Jamaica and Dancehall Reggae music again in its indigenous form,” says the triple-threat singer/producer/musician. “My thing is to sing Jamaican music, but mix it with a little pop, a little urban, and help people understand what I’m saying.”