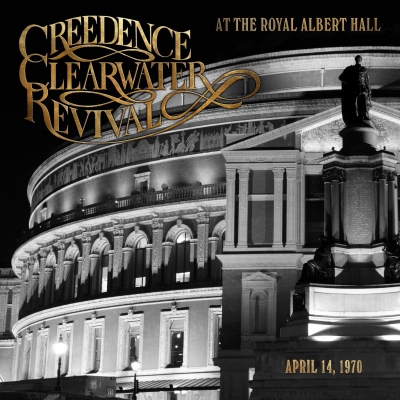 For decades, rumors have circulated among Creedence Clearwater Revival’s fans about a long-lost recording of their legendary 1970 show at London’s Royal Albert Hall. Now, Craft Recordings is thrilled to announce that the rumors are, indeed, true. Available for pre-order today in multiple formats (detailed below), the long-awaited Creedence Clearwater Revival at the Royal Albert Hall presents the concert in its entirety and finds CCR at the apex of their career, playing the most prestigious venue in London. Placing listeners front and center at the show, the album features John Fogerty, Tom Fogerty, Doug Clifford, and Stu Cook performing such (now classic) hits as “Fortunate Son,” “Proud Mary,” and “Bad Moon Rising.”

Creedence Clearwater Revival at the Royal Albert Hall will be available September 16on 180-gram vinyl, CD, and cassette tape, while select retailers will offer a variety of exclusive color variants, including Walmart (“Tombstone Shadow” vinyl) and Target(“Green River” vinyl). Additionally, the album will be available across digital platforms, including in hi-res and Dolby® ATMOS immersive audio formats. A limited Super Deluxe Edition Box Set will follow later in the year, more details below.

After spending roughly 50 years in storage, the original multitrack tapes were meticulously restored and mixed by the GRAMMY® Award-winning team of producer Giles Martin and engineer Sam Okell, who have helmed countless acclaimed projects together, including the Beatles’ 50th-anniversary editions of Abbey Road and Sgt. Pepper’s Lonely Hearts Club Band, as well as audio for the Elton John biopicRocketman and Peter Jackson’s The Beatles: Get Back Series. The LP was mastered by the celebrated engineer Miles Showell at Abbey Road Studios using half-speed technology for the highest-quality listening experience.

Creedence Clearwater Revival at the Royal Albert Hall will be released concurrently with the documentary concert feature film, Travelin’ Band: Creedence Clearwater Revival at the Royal Albert Hall. Directed by two-time GRAMMY® Award winner Bob Smeaton (The Beatles Anthology and Jimi Hendrix Band of Gypsies) and narrated by Academy Award®-winning actor Jeff Bridges, the film takes viewers from the band’s earliest years together in El Cerrito, CA through their meteoric rise to fame. Featuring a wealth of unseen footage, Travelin’ Band culminates with the band’s show at the Royal Albert Hall—marking the only concert footage of the original CCR lineup to be released in its entirety.

On November 14, both the album and the film will be presented in a Super Deluxe Edition Box Set, available exclusively via CraftRecordings.com. The 2-LP/2-CD/1-Blu-ray collection includes Creedence Clearwater Revival at the Royal Albert Hall on two 45-RPM 180-gram vinyl LPs as well as on CD. A second CD features music from the film, including formative recordings from the band’s earliest incarnations (including Tommy Fogerty and the Blue Velvets and the Golliwogs). While the Blu-ray offers the complete Travelin’ Band: Creedence Clearwater Revival at the Royal Albert Hall film, plus the digital album in hi-res and Dolby ATMOS® immersive audio. Limited to 5,000 copies worldwide and available to pre-order now, each individually numbered set is housed in a 12” x 12” box, with embossed gold foil detail, and includes a reproduction of the original 1970 tour program, a 17” x 24” poster, and a 16-page booklet, featuring an excerpt from Bridges’ voice-over script, which offers background on the band’s incredible path to the London show.

When Creedence Clearwater Revival stepped onto the Royal Albert Hall’s stage on April 14, 1970—just days after the Beatles announced their breakup—the California rockers had arguably just become the biggest band in the world. Leading up to the show, CCR had enjoyed an unprecedented “magical year,” as Jeff Bridges narrates in the film. “In only 12 months the band had achieved five Top 10 singles and three Top 10 albums [Bayou Country, Green River, Willy and the Poor Boys] on the American charts, outselling the Beatles. They had appeared on the legendary Ed Sullivan Show and played to over a million people across America, including the hundreds of thousands gathered at Woodstock. ‘John, Tom, Stu, and Doug’ may not have had the familiar ring to it of ‘John, Paul, George, and Ringo,’ but Creedence were challenging the Beatles for the title of the biggest group in the world.”

Indeed, the band’s Southern-steeped, “swamp rock” sound permeated global airwaves throughout 1969. Singles like “Proud Mary,” “Green River,” “Fortunate Son,” and “Down on the Corner” were in the Top Ten across Europe, North America, and Australasia, while “Bad Moon Rising” hit No.1 in the UK and New Zealand. But Creedence was more than just a commercial success. By the end of 1969, Bridges notes, “John Fogerty was considered one of America’s most politically significant songwriters,” following his biting commentary on class amid the Vietnam War in “Fortunate Son.” The critics were paying close attention to CCR, while Rolling Stone declared them to be the “Best American Band.” As the new decade dawned, Creedence played a triumphant hometown show at Oakland Coliseum. Less than four months later, in April, the four-piece embarked on their first European tour—an eight-show run that included stops in Holland, Germany, France, and Denmark.

The band considered their two sold-out London shows to be a test of sorts, to measure the success of their European tour. Opening their first night with “Born on the Bayou,”the band delivered a high-energy 12-song set. “What set Creedence apart from many of their contemporaries was their ability to produce the sound of their records on stage, and the primal excitement and joy of their concerts, which came from their love of live performance,” explains Bridges.

As they concluded the show with “Keep on Chooglin’,” the band was met with a 15-minute-long standing ovation from the audience. The next day, they would receive rave reviews from such stalwart publications as The Times and the NME, who boldly declared “Creedence Clearwater Revival had proved beyond a doubt that they are, in more opinions than mine, the Greatest Rock and Roll Band in the World. In their capable hands, not only is te true spirit of rock music alive and well, but it is kicking like a mule.” During their two-night residency at the iconic venue, CCR no only followed in the footsteps of acts like the Rolling Stones, Led Zeppelin, Jimi Hendrix, and the Beatles, but they proved they were equals.
While Creedence Cleawater Revival would go their separate ways just two years later, speculation around a live recording of that legendary concert began to pereate their fanbase in 1980. That same year, Fantasy Records had released a live album by the band, mistakenly titled The Royal Albert Hal Concert. It was quickly discovered that the audio was, in fact, from the Oakland Coliseum show, captured months earlier. While the lbel rushed to sticker the album with correctional information—and properly re-named the January 1970 performance as The Concert for later production runs—actual footage from the Royal Albert Hall remained the stuff of rock ’n’ roll lore….until now.

Music from the Motion Picture: Travelin’ Band: Creedence Clearwater Revival at the Royal Albert Hall (CD)
1. Come On Baby – Tommy Fogerty and the Blue Velvets
2. Brown Eyed Girl – The Golliwogs
3. Porterville – The Golliwog
4. Suzie Q.
5. I Put a Spell on You
6. Proud Mary
7. Born on the Bayou
8. Bad Moon Rising
9. Green River
10. The Night Time Is the Right Time
11. Down on the Corner
12. Who’ll Stop the Rain?

Creedence Clearwater Revival at the Royal Albert Hall tracklist (Vinyl, Cassette)
A1. Born on the Bayou
A2. Green River
A3. Tombstone Shadow
A4. Travelin’ Band
A5. Fortunate Son
A6. Commotion
A7. Midnight Special
B1. Bad Moon Rising
B2. Proud Mary
B3. The Night Time Is the Right Time
B4. Good Golly Miss Molly
B5. Keep on Chooglin’