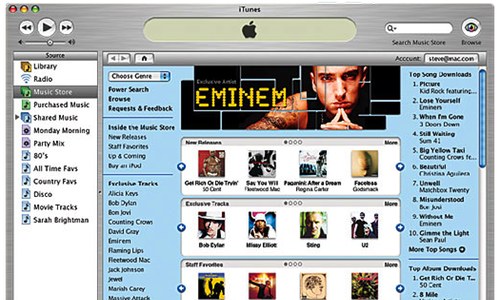 People equated burning CDs with theft. That’s not what burning CDs is. Theft is about acquiring the music from the Internet. You don’t have to burn CDs to steal music; you just have to go on Kazaa. Why would you have to burn a CD? That’s an extra step. Some people burn a lot of CDs and hand them around the dorm room, but that’s not a lot of the theft. Theft is everybody going to Kazaa on their own. Most of burning CDs is people making custom compilations. That’s a good thing. They want to listen to the tracks they want in the order they want, and as long as they legally acquire those tracks, that’s a good thing. … So the first thing we had to do was really draw a distinction between burning CDs — a good thing — and theft, not a good thing. People want the right to burn CDs. If you tell people they can’t burn CDs of their music, as almost every current legal music service has done, or they can only burn one CD with a track or pay per track per burn extra, nobody is going to go for it. … And frankly, with those kinds of limitations, you might as well put a huge sign that says KAZAA THIS WAY. Because they’re not going to suffer under them. They don’t suffer under them if they buy a CD or if they turn into a thief and go to Kazaa. So you’re not going to win them over by putting up these limitations.

We approached it as ‘Hey, we all love music.’ Talk to the senior guys in the record companies and they all love music, too. … We love music, and there’s a problem. And it’s not just their problem. Stealing things is everybody’s problem. We own a lot of intellectual property, and we don’t like when people steal it. So people are stealing stuff and we’re optimists. We believe that 80 percent of the people stealing stuff don’t want to be; there’s just no legal alternative. So we said, Let’s create a legal alternative to this. Everybody wins. Music companies win. The artists win. Apple wins. And the user wins because he gets a better service and doesn’t have to be a thief.