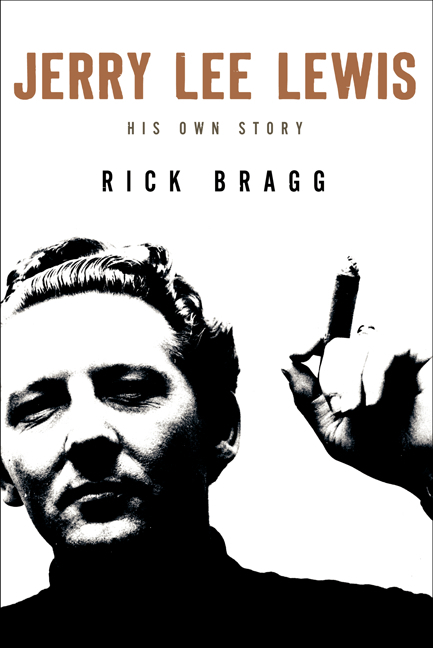 For nearly sixty years, Jerry Lee Lewis has been a monumental figure in American life. The wildest and most dangerous of the early rock and rollers, he electrified the world with hit records such as “Whole Lotta Shakin’ Goin’ On,” “Great Balls of Fire,” and “Breathless.” His music was raucous, exuberant, slyly sexual; his wailing vocals were grounded by the locomotive force of his pumping piano. But his persona and performing style were what changed the world: whipping his long hair back, he would pound the keyboard like a coal-fired steam engine, then kick back the bench, climb atop the piano, and work the audience like the Pentecostal preacher he almost became. Poised to steal the crown from Elvis Presley, he seemed unstoppable—until news of his marriage to his thirteen-year-old cousin broke during his first British tour, nearly ending his career.

Now, for the first time, Lewis’s story is told in full, as he shared it over two years with Pulitzer Prize–winning writer Rick Bragg. In a narrative rich with atmosphere and anecdote, we watch Jerry Lee emerge from the fields and levees of Depression-era Louisiana, blazing a path across Bible colleges and nightclubs en route to international fame. He shared bills with Johnny Cash and Chuck Berry, toured Australia with Buddy Holly and Paul Anka, and went Cadillac for Cadillac with Elvis on the streets of Memphis—even as both of them struggled with the conflict between their faith and their music. After a decade in the wilderness, he returned as the biggest star in country music, but his victory lap became a marathon of excess, a time of guns and pills and Calvert Extra. He crashed Rolls-Royces and Lincolns, including one he drove into the gates of Graceland; suffered the deaths of wives and loved ones; and nearly met his maker twice himself. Yet after six marriages, a long spell without a recording contract, and a bruising battle with the IRS, he overcame a crippling addiction, remarried, and scored his biggest hit records since the 1970s. Today, as he approaches his eightieth year, he continues to electrify audiences around the world.

The story of Jerry Lee Lewis has inspired songs and articles, books and films, but in these pages Rick Bragg restores a human complexity missing from other accounts. The result is a story of fire and faith and resilience, informed by Rick Bragg’s deep understanding of the American spirit, and rich with Jerry Lee’s own unforgettable voice.

Eric: I worked Jerry Lee Lewis’ Last Man Standing album and it was the only time I’ve ever been scared to meet with an artist because of his reputation. I know he can be a great guy, a gentle and kind man. But he still scared me.
Rick Bragg: Well you know, one of the things that happen was he showed me the brush steel .357 Magnum pistol that he had under his pillow. And he shot his bass player in the chest. And I was thinking to myself every time that I would ask him a hard question or brutal question, he shot his bass player, why not shoot your biographer?

Eric: What was your first meeting with him? When did you first realize that you wanted to write a book on Jerry Lee Lewis and how tough was it to get him on board?
Rick: Well, I was very lucky quite frankly. Jerry Lee had reached a point in his life where he wanted to tell his story. He wanted to tell, you know everyone else had had a shot at. He wanted to tell his story his way, at this point in his life. But he also did one whitewash. Jerry Lee doesn’t want to be whitewash in oh he wanted to do one of those books that make him less than he it. And I was just lucky that I got a call from a publishing house in New York that had Harper Collins had bought the rights to his story. And I got a call from my agent in New York saying, and this succinctly “You got any interest in doing a book on Jerry Lee Lewis”? And looking back I probably should’ve gone and he under my bed. But instead I thought, how can this be dull? How can this not be more fun than anything I could make up about Jerry Lee? And I was right about that.
Eric: Jerry Lee’s always been very paranoid about the journalist getting the story right. I don’t think it’s an act, I truly think he believes that we might have him all wrong a little bit. How much do you think we know about Jerry Lee Lewis is accurate?
Eric: Well I think in the things that matter. I think the historical record of Jerry Lee has been pretty straightforward. You know he did when the news of his marriage to his 13-year-old cousin Myra came out. He was savage in the press and he did claw his way back. All that is pretty basic. But it’s the details that Jerry Lee – generally owns up to his lifelong drug addiction. He owns up to the violence. That you could land the plane he was on at one point and you could shake the pills out of the cushion. And he doesn’t deny that he did that. And that he hit a guy in the face with the butt end of a microphone stand once. He really did make Elvis cry. But the way it happened is not the way that the news and others have portrayed it. It’s the details.

Eric: That’s why I love this book and that’s why I think in the age of the internet, living in social media in 140 characters, there’s still a place for a good biography where it takes a few weeks to read. Jerry has always owned up to everything he’s done. He’s claimed that God has not killed him in order to just keep reliving the punishment of his past sins. He’s not trying to deliver a line that we’ve never heard before or tried to change history. You were the perfect writer to tell the stories and the details. Did he recognize that in the beginning?
Rick: I don’t know. We had to do some pretty tough days together. There were days talking about – there’s so much death that has swirled around Jerry Lee Lewis. Not to be melodramatic, he buried two sons. Two wives. He’s had Rolling Stone virtually accusing him of murder, the death of one of his wives.
Eric: No to mention all the battles with the IRS.
Rick: Right, the IRS has dogged him but not just dogged him but cleaned his house out. Took the piano that his father bought for him when he was a little boy. There’s always been violence. He’d be playing a piano in Atlanta, look up and there’d be a .45 caliber bullet resting on the ledge of the piano where some jealous husband had put it. He doesn’t deny any of that. He talks about, every day I would sit in his bedroom – he was feeling terrible. Across two summers he had chronic arthritis in his back that resulted in a back surgery. He’s actually feeling a little better now. He had a compound fracture in one leg with an infection that almost killed him. He had pneumonia, you name it. He almost left us again. His obit has been written 100 times, he almost left this world again. But day after day, he’d lie there in that bed, in the cool dark of his bedroom and he would just take me off down to Sun Records in 1957/58. He’d take me to Faraday, LA in the bottom land where he learned to play in a church. Where he hid under the table in the Juke Joint to hear the gut bucket blues. People ask me – “Did you realize you were getting to listen to fine history?” I was so anxious to get it all down that I didn’t really appreciate it until I was done. Then I thought; man, you should have enjoyed this a lot more!