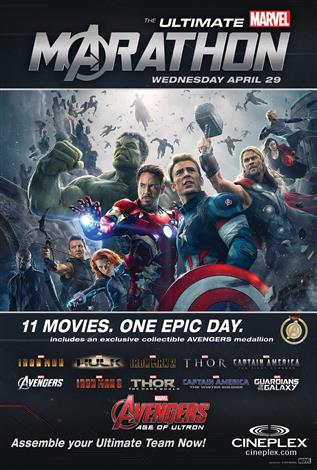 On April 29th, 2015, you can take The Ultimate Marvel Marathon challenge at select Cineplex theatres to see all the Marvel Studios feature films released chronologically starting with IRON MAN; THE INCREDIBLE HULK, IRON MAN 2; THOR: CAPTAIN AMERICA: THE FIRST AVENGER; MARVEL’S THE AVENGERS; IRON MAN 3; THOR: THE DARK WORLD; CAPTAIN AMERICA: THE WINTER SOLDIER; GUARDIANS OF THE GALAXY and the opportunity of being one of the first to see: AVENGERS: AGE OF ULTRON – When Tony Stark jumpstarts a dormant peacekeeping program, things go awry and Earth’s Mightiest Heroes, including Iron Man, Captain America, Thor, The Incredible Hulk, Black Widow and Hawkeye, are put to the ultimate test as they battle to save the planet from destruction at the hands of the villainous Ultron.

See all 11 movies, and you’ll get an exclusive collectible Avengers medallion, too. Click here to buy your tickets.