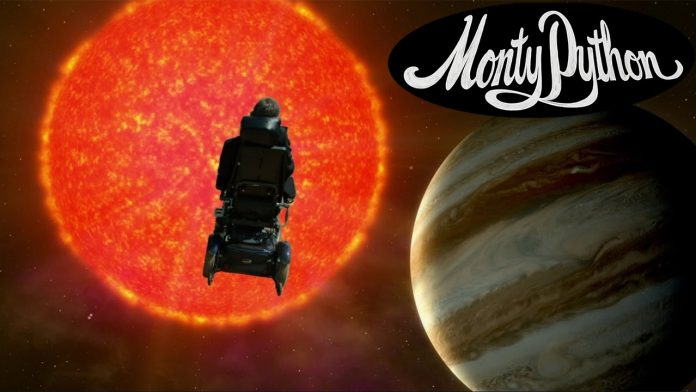 Here is the video for Monty Python’s new single, “Stephen Hawking Sings Monty Python… Galaxy Song” which is available as a digital download from April 1, and on limited edition 7” vinyl on Record Store Day 2015.

Written by Eric Idle and John Du Prez, the song is an intricate and informative lecture on the enormity of the Universe fashioned into a bewitching and, above all, highly amusing pop song.

“Galaxy Song” was previously included on the 1989 album “Monty Python Sings”, and included in the 2014 reissue of the album, “Monty Python Sings (again)”, in its original form – sung by Eric Idle – to coincide with Monty Python’s record breaking “Monty Python Live (mostly) – One Down Five to Go” run of 10 live shows at The O2, London. On film during the live shows, Professor Brian Cox berated the scientific inaccuracy of the “Galaxy Song » lyrics before Professor Stephen Hawking knocked him to the ground. Hawking then began reciting the “Galaxy Song” lyrics as he lifted off to journey through outer space. It is this unique rendition of “Galaxy Song” which is now available as a single.