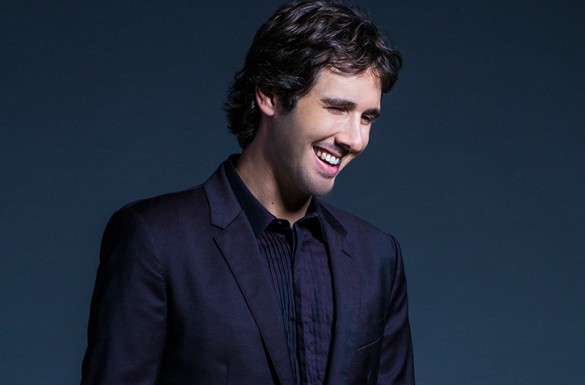 Multi-platinum recording artist Josh Groban has announced that he will launch a Fall 2015 North American tour in support of his upcoming album Stages. The tour, produced by Live Nation, will begin on Sept. 12 in Atlanta and continues through early November. THE STAGES TOUR will visit specially selected theaters around the country, giving fans accustomed to seeing Groban perform in arenas (as he did on his 2013 “In The Round” and “All that Echoes” tours) a more uniquely intimate experience. Tickets go on sale April 24 at www.livenation.com. With every ticket purchased online, fans will receive a choice of either a standard physical or a standard digital copy of Stages.

Groban will make several television appearances during release week for Stages, which is due from Reprise Records on April 28. He will appear on Good Morning America on April 28, The Tonight Show Starring Jimmy Fallon and Live! with Kelly and Michael on April 29, and Dancing With The Stars on May 5. He will also sing the National Anthem at the 2015 Kentucky Derby on May 2.

Stages is a collection of some of the greatest musical theater songs of all time, which Groban describes as “gorgeously arranged songs that have stood the test of time,” and which he was drawn to because of their combination of “incredible melody with an incredible story.” The album is available for pre-order at all participating retailers and JoshGroban.com. An exclusive edition of the album will be available at Target containing two extra tracks.

Recorded with producers Humberto Gatica and Bernie Herms in both Los Angeles and London’s Abbey Road (with a 75-piece orchestra), Stages features songs from Les Misérables (“Bring Him Home”); Rodgers and Hammerstein’s Carousel (“You’ll Never Walk Alone”); Stephen Sondheim’s Sunday in the Park with George (“Finishing the Hat”), Sweeney Todd (“Not While I’m Around”) and Into the Woods (“Children Will Listen”); The Fantasticks (“Try to Remember”); A Chorus Line (“What I Did For Love”); Andrew Lloyd Webber’s Phantom of the Opera (“All I Ask of You”), The Wizard of Oz (“Over the Rainbow”), and others. Another highlight is “Pure Imagination,” originally sung by Gene Wilder in the film Willy Wonka & the Chocolate Factory. Watch the album trailer for Stages here.