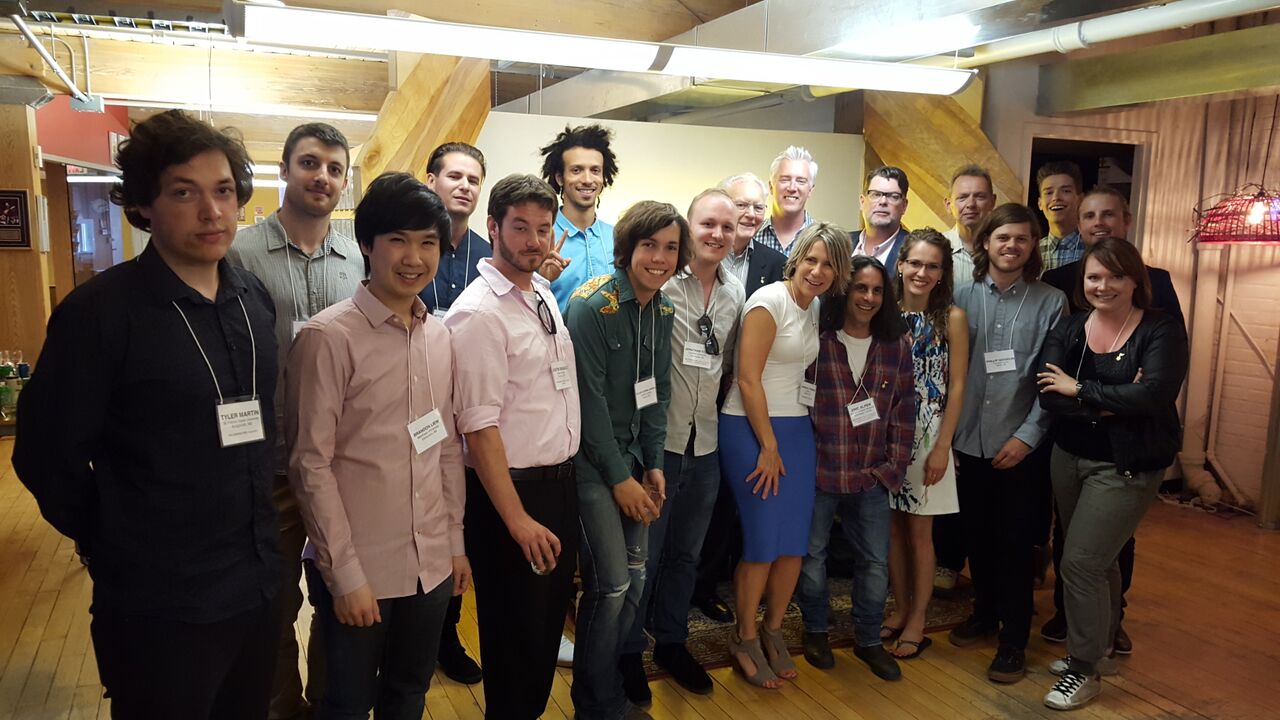 MusiCounts hosted a special event in Toronto yesterday to celebrate the talent and leadership of the 2015 Fred Sherratt Award recipients. I was proud to be one of the several music industry people in attendance, offering well wishes and a short (ok, long) version of my own story. This year’s celebrations included a visit to Universal Music Canada, a tour of the Bell Media headquarters and an industry Music Mixer where the recent graduates had access to insight and experience from a range of executive-level music industry professionals in attendance. Award-winning broadcasting pioneer Fred Sherratt was onsite to congratulate the 12 recipients who were selected from post-secondary music programs across the country.

“It’s a great honour to celebrate these awards,” said Fred Sherratt. “It was inspiring to see so many promising young graduates getting very impactful advice from industry leaders who have made a great name for themselves in the music world. I know there is a bright future ahead of all 12 recipients.”

The annual award was first launched in 2008 in partnership with Bell Media and named in honour of award-winning innovator Fred Sherratt. It recognizes the outstanding achievement, talent, and leadership of graduating music program students and aims to assist the recipients in their transition from school to career. Each student awarded received $2,500 and a trip to Toronto to attend an educational day of networking and touring top Canadian music industry institutions.

“This scholarship program represents that crucial juncture between music education and the path to future JUNO Award winners,” said Allan Reid, President & CEO, CARAS/The JUNO Awards & MusiCounts. “Without the support of Bell Media for a program like this to exist, we wouldn’t be able to provide this kind of high-end experience that helps to open doors for promising prospects that represent the future of the music industry.”

Fred Sherratt is a broadcasting pioneer who was instrumental in building CHUM, served as Vice-Chairman of the company from 2000-2003 and prior to that held a number of roles including Executive Vice President and Chief Operating Officer. He was inducted into the Canadian Association of Broadcasters Broadcast Hall of Fame in 1995, in 1993 received the Ted Rogers Senior / Velma Rogers Graham Award for his “pioneering spirit and contribution to the broadcasting system”, and in 2008, received the Ontario Association of Broadcasters’ inaugural Lifetime Achievement Award and was also honoured by CARAS in 2009 with the Walt Grealis Special Achievement Award.

MusiCounts, Canada’s music education charity associated with The Canadian Academy of Recording Arts and Sciences (CARAS) and the Canadian Country Music Association (CCMA) is helping to keep music alive in schools and communities across Canada by putting musical instruments into the hands of children that need them most. MusiCounts’ mission is to ensure that children in Canada, regardless of socio-economic circumstances or cultural background, have access to music programs through their schools and communities. MusiCounts achieves its mission through its Band Aid Program, the MusiCounts TD Community Music Program, the MusiCounts Teacher of the Year Award, Scholarships and other music education initiatives. MusiCounts is funded by many of Canada’s most dedicated corporate citizens including and especially Bell Media, TD Bank Group, SiriusXM Canada, the Slaight Family Foundation, Music Canada, Vista Radio, and Morningstar Canada. MusiCounts has been supported since inception by Sony Music Entertainment Canada Inc., Universal Music Canada, Warner Music Canada Ltd., JUNO Songwriters’ Circle and JUNO Cup. Since MusiCounts’ establishment in 1997, nearly $8,000,000 has been awarded in support of music education in Canada. These funds have benefitted over 700 schools and communities from coast to coast, supported over 300 post-secondary music program graduates and honoured 10 extraordinary music teachers through the MusiCounts Teacher of the Year Award.