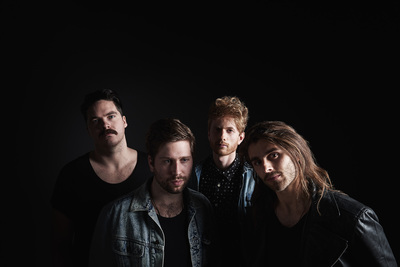 Canadian Indie-pop outfit, Van Damsel have just announced that they will be partnering with The David Suzuki Foundation over the course of their Canadian fall tour to help promote environmental awareness and sustainability, specifically focusing on positive change at the individual level. The BC-based four-piece have launched a “Consider Your Impact” campaign to challenge their fans to really consider their personal impact on the planet and what small, reusable changes in their lives they can do to limit their impact.

“The welfare of our planet is of paramount concern,” comments drummer Matthew Barron. “As musicians with the potential to influence audiences and our fans, we feel it is our duty to promote environmental awareness and sustainability. Given that we only have one planet with a finite amount of resources, we really wanted the opportunity to do something special to help our world and feel that the David Suzuki Foundation is an ideal partner for us.”

Along with helping to educate and promote positive change at their shows, from now until October 18th, Van Damsel will donate 100% of the proceeds from their limited edition custom tote bags and 10% of all merchandise sales, which includes a special limited edition reusable water bottle, to the David Suzuki Foundation. For more information on the David Suzuki Foundation visit here.

Joining Van Damsel on their Canadian tour this fall is Vancouver outfit The Tourist Company. Before hitting the road with the experimental pop-rock group, Van Damsel will open for Tokyo Police Club in Vancouver on September 18 at The Imperial. Tickets for all shows are now on-sale. See below for complete details.

Van Damsel, who once again landed a spot at the PEAK Performance Project and are currently in the Top 12, just wrapped up a week-long sojourn at the PEAK Performance Bootcamp. The band is set to release their long-awaited, highly anticipated self-titled debut album in early 2016. More details about the record will be announced in the coming months. In the meantime, check out the video for the lead single off their forthcoming record “Best of Everything” below.