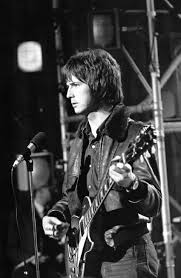 “Eric Clapton is the most important and influential guitar player that has ever lived, is still living or ever will live. Do yourself a favor, and don’t debate me on this. Before Clapton, rock guitar was the Chuck Berry method, modernized by Keith Richards, and the rockabilly sound — Scotty Moore, Carl Perkins, Cliff Gallup — popularized by George Harrison. Clapton absorbed that, then introduced the essence of black electric blues: the power and vocabulary of Buddy Guy, Hubert Sumlin and the three Kings — B.B., Albert and Freddie — to create an attack that defined the fundamentals of rock & roll lead guitar. Maybe most important of all, he turned the amp up — to 11. That alone blew everybody’s mind in the mid-Sixties. In the studio, he moved the mic across the room from the amp, which added ambience; everybody else was still close-miking. Then he cranked the fucking thing. Sustain happened; feedback happened. The guitar player suddenly became the most important guy in the band.”