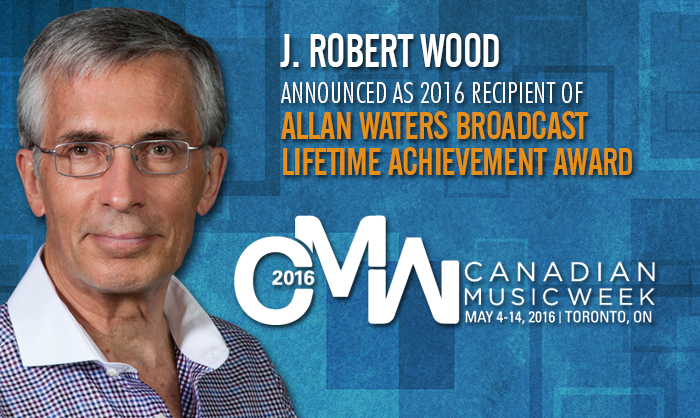 Canadian Music Week is pleased to announce J. Robert Wood as the 2016 inductee to the Canadian Broadcast Industry Hall of Fame. An innovator and veteran of the industry for more than five decades, Wood will be honoured for his achievements and longstanding career in broadcasting with the Allan Waters Broadcast Lifetime Achievement Award. The induction ceremony will take place during the Canadian Radio Music Awards luncheon beingpresented by Bell Media, on Friday, May 6, 2016 at the Sheraton Centre Toronto Hotel.
J. Robert Wood is a radio broadcast management consultant with more than 40 years experience in programming, operations, management, large-scale project development, network expansion, government lobbying and fund-raising. Born in Teulon, Manitoba, Wood began his career as an on-air deejay at CKSA in Lloydminster before moving to CKOM Saskatoon, CKY in Winnipeg and CHLO in St. Thomas. Following a successful tenure as program director of CHLO, he moved to CHUM in 1968 where he served as Program Director of CHUM, National Program Director of CHUM Group stations across Canada, and Manager of CHUM and CHUM-FM in Toronto.

“Bob Wood came to CHUM in 1968. Over the next ten years or so, he, and maybe the greatest radio staff ever put together, created magic on 1050 CHUM! Bob was imaginative, creative and a great leader”, said former CHUM Chairman Jim Waters. “His winning the Allan Waters Broadcast Lifetime Achievement Award is Iong overdue!”

Wood left CHUM in the mid-1980s to apply for a Toronto radio license; he went on to pursue broadcast management consulting, fund-raising and government lobbying activities. From 2000 to 2010, he helped launch the Aboriginal Voices Radio network (AVR), for which he raised more than $15 million.

“I feel very honoured to be selected for this Award and am grateful to accept it on behalf of the many talented men and women at CHUM whose hard work, dedication and creative brilliance enabled us to create one of broadcasting’s great radio stations,” said Wood.

Wood was inducted into the Canadian Music Industry Hall of Fame in May of 1978 by RPM Magazine. The former radio editor of Billboard Magazine, Claude Hall, ranked Wood as number 12 on his list of the 15 best Top 40 program directors in North America in 2012. In choosing Wood, Hall said, “Robert Wood was Canadian radio.”

An innovator and entrepreneur, Wood initiated a number of projects in the early days of Canadian content regulations to help promote the development of Canadian music, including the Maple Leaf Music Network (10 stations across Canada agreeing to play the consensus choice of three new Canadian records per week), the CHUM Free Ad Plan (providing free commercials for newly released songs by Canadian artists) and the CHUM Report (a weekly report he wrote which was distributed to radio and record companies to help promote new up-and-coming Canadian music and improve the relationship between radio and record people at the time.)

Wood has served on various industry committees including CAPAC, the CAB and the United Way’s media unit and has played a pivotal role in the launch of FACTOR (Foundation to Assist Canadian Talent on Record.) He has helped many broadcasters over the years, including the launch and advancement of the careers of many young broadcasters and has helped more senior broadcasters survive the difficulties visited upon them due to ill health.