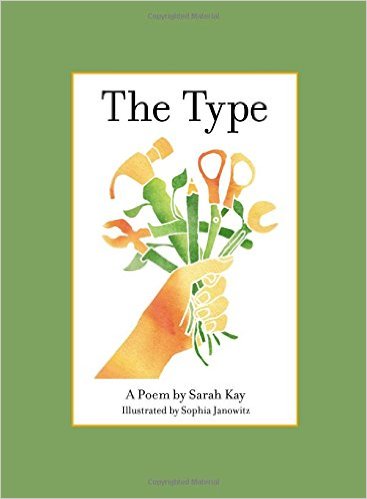 Sarah Kay’s powerful spoken word poetry performances have gone viral, with more than 10 million online views and thousands more in global live audiences. In her second single-poem volume, The Type, Kay takes readers along a lyrical road toward empowerment, exploring the promise and complicated reality of being a woman. The wonderful Brain Pickings blog sat down with her and talked about how we measure success.

Brain Pickings: And this brings us back to the legitimacy question — if making a living isn’t the metric of success in creative work, if academic credentials aren’t it, then what is? What is your internal barometer for your own legitimacy?

I think my work, from a broad perspective — by this I mean my work as a writer, teacher, organizer, human — is about trying to invite people in and create spaces where people feel welcome and comfortable with poetry, but are still creatively challenged. When that’s happening, that feels like success to me.

I think of that fable a lot, because it’s not so much about what kind of a man you are — it’s about how you look at the work you’re doing. And I don’t think it’s a judgment on any particular way of looking at the world — in fact, I think we all probably contain all three of those, and we shift in and out depending on where we are in our lives, or even in our day.

For me, when I’m creating a poem, it feels like I’m laying bricks — it’s very logistical, a physical movement of words, putting them together, focused on the minutia of the poem. And when I’m in schools, working with young people, I’m focusing on building connections with them and for them — that feels like building a wall, creating something that’s part of something else. The temple part is a much rarer moment of being able to tap into something bigger than yourself. But what’s so wonderful about all of this is that if you focus on one of the three for too long, you lose sight of the other two — so it requires a lot of shifting and balancing in order to get anything done at all.

And in terms of success, although I spend a lot more time on the brick-laying and wall-building — I spend more time writing poems and teaching workshops — and I far less frequently get a chance to witness the visions of temple, when those visions do appear, they’re easier to identify as points of success than in those other two realms.

One vision-of-temple moment for me has come from my work with a community of poets in Katmandu and Nepal, whose work is so important to me and probably the thing I’m proudest of. When I first met them, they were a handful of young kids who were curious about spoken word but hadn’t really done it. I worked with them — I did a lot of workshops and brought them to schools — and when I left, they continued that work. They have since grown this immense spoken-word poetry community and received this huge grant from the government to do a two-year program supporting spoken-word programming in six different areas of rural Nepal, specifically working with marginalized groups like the LGBTQ community, recovering drug addicts, the physically disabled, and young women, who are deeply marginalized in that society right now.

The fact that they are using this art form to make community and allow people who are not listened to and not heard in the larger society have the opportunity to speak for themselves and be witnessed in their stories — that is the temple to me.