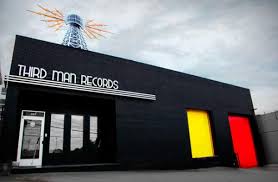 How have practices changed at Third Man since it was founded?

“The label started mainly in name only in 2001, and then became really active with the brick-and-mortar offices/studio/record shop/venue location in 2008. In 2001, being buoyed by all these sloppy garage-rock bands getting national attention and touring the world, the possibilities felt kind of endless (we were young and dumb). In 2008, opening these offices released a torrent of inspiration and excitement that I think people really related too and engaged with, and now nearly seven years later I really do feel like new opportunities open up every day.

“It’s important to us to approach things in an unconventional, but wholly artist-friendly way, and that’s been really helpful in spreading a good rep around the “biz.” I think anyone can do what they want, as long as they don’t listen to how everyone else is doing it… It’s very much the wild west right now, and most bands have more control then ever, though the financial resources and backing aren’t what they used to be… but as long as you’re making music for your own reasons and have reasonable expectations and understand that it’s a partnership between artist and label, I think you’re going to meet your goals. Being excited about what you do (both labels and bands) goes a hell of a long way.” – Ben Swank, “Consigliere” for Third Man Records