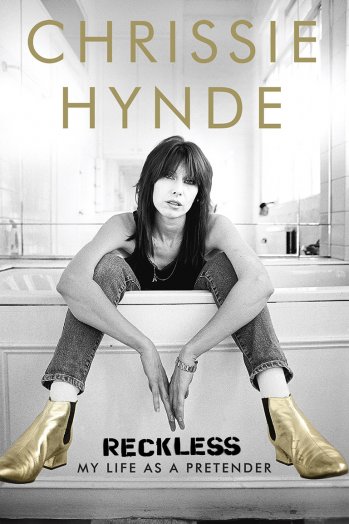 Few other rock stars have managed to combine her swagger, sexiness, stage presence, knack for putting words to music, gorgeous voice and just all-around kick-assedness into such a potent and alluring package. From “Tatooed Love Boys” and “Brass in Pocket” to “Talk of the Town” and “Back on the Chain Gang,” Chrissie Hynde’s signature songs project a unique mixture of toughness and vulnerability that millions of men and women have related to. A kind of one- woman secret tunnel linking punk and new wave to classic guitar rock, she is one of the great luminaries in rock history. In this interview with The Globe and Mail, Chrissie talks about the artistic expression, and when sex needs to be involved (hint: it doesn’t).

In the book you describe being accosted by a group of bikers, who took you back to their headquarters for a ‘party.’ There was a strong response in the Internet cycle about your statement that you accept responsibility for the sexual violence –

See, I never said any of this, and I don’t read my press. I was talking to a journalist, and she was sort of prodding me – she was nice, I liked her, we had a fun afternoon. But I think she missed the point, that when this altercation happened I was so fucked up on Quaaludes I didn’t even care. So she kept prodding me to say, was I traumatized by this thing, or was I victimized, and all I was saying was that I was an idiot to even be there. She kept trying to get me to rephrase that. And it went into an article that I didn’t read. And the next thing you know I’m vilified for defending rapists! I never even said I was raped. And you know, frankly, if you’re being very provocative – let’s take a music video. You know, if you’re being sexually provocative, and you’re a woman, in a video, what’s the message?

What is the message?

I don’t know. I’m asking you. What do you think the message is?

I don’t know that there is necessarily one message. In general I think it’s fine to make a living with your body.

I can think of female musicians for whom sexuality is part of the package, and it doesn’t feel outside of the music. Someone like Madonna’s sexuality feels like part of her art.

What if you took her sexuality out of it, and just listen to the records? Do you think she would have sold as much of it?

That’s sex work. That’s still using sexuality to sell something. Why be sexual, that’s the question. Why? To what end? Why not just be a person? You see, to me, sex is an appetite. Better to play it down, because it causes a lot of problems.

Well, I think it’s natural to want to be looked at and admired.

Is it?! In a sexually provocative way? To be admired as an object of desire?

Absolutely. And I also think it’s reasonable to expect men not to violate your personhood just because you are desirable.

But what does that say about the mentality of someone who’s walking down the street trying to be sexy? I disagree with you; I don’t think that is natural. I never felt like that. Ever. I mean, I want to look pretty good. You don’t want to go out and look bad. But to go out and look sexually provocative and sexual, no. I’ve never tried to do that. And I think a lot of women don’t try to do that.

I don’t know why anyone would. Why don’t you just look cool, why don’t you just look good? Why is sex so important? Why is it so important to be sexy, or desirable? I mean, ultimately, what does that lead to? It leads to sex. So if you don’t want to have sex, why are you trying to look like that? Are you trying to make someone think that you’re sexy but you don’t want to deliver? If you’re a sex worker, that’s got an end to it, and that means something. I’m not saying that everyone has to be completely covered, but why can’t you just be?

I guess I don’t see anything inherently wrong with wanting to look desirable or pleasing in that way.

I didn’t say that. I never thought there was anything wrong with it. All I’m saying is, Why do you want that?

Because it feels good, and it’s validating, and sometimes it makes people happy.

Well, I’ve gotten by without it. Not that I’m saying I’m any prize. Or that I’ve done anything right. I’m not comparing myself to anyone. It’s just an interesting question that you brought up. And I’ve been waiting for someone to bring this up, because of this kerfuffle I got in where I said look, if you’re drunk, and you’re walking down the street in your underwear, the message that puts out is the same message as a sex worker: Come and get it. That’s all I said! And that seemed to trigger off some kind of debate, which I wasn’t really a part of because I don’t read the press. In any one of the interviews or discussions I’ve had in the last few weeks, I’ve never said that I thought women should dress a certain way or do a certain thing. I was just talking about what happened to me. And then you know, only a total imbecile would have been where I was, and that applies to about 30 years of my life. Hence the name of the book. I don’t recommend it to anyone. And I lost a lot of people along the way.