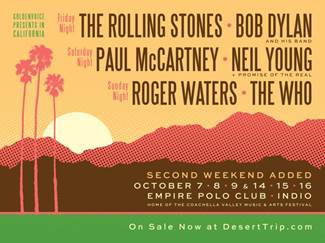 Due to overwhelming demand, a second weekend has been added to Desert Trip, Friday, October 14 – Sunday October 16. Six of the world’s most iconic and influential rock and roll artists will come together for a second weekend in Indio, CA.

As with the previous weekend, on Friday night October 14 the concert event will feature The Rolling Stones and Bob Dylan and His Band, followed on Saturday night, October 15 by Paul McCartney and Neil Young + Promise of the Real, with the weekend coming to a close on Sunday night, October 16 with Roger Waters and The Who.

With performances starting after sunset, each artist will play a full set, serving up three incomparable nights of rock ‘n roll. Located at the home of the critically acclaimed Coachella Valley Music and Arts Festival this is the only time and place to see this incredible lineup.

Reserved seats and general admission passes will go on sale today at 10AM PT DesertTrip.com