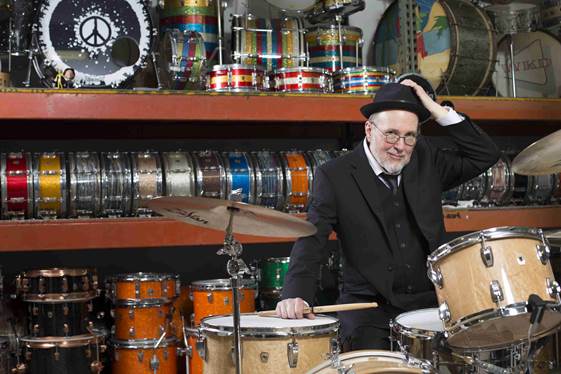 Cheap Trick drummer and 2016 Rock & Roll Hall of Fame Inductee Bun E. Carlos announced the release of his new solo album, “Greetings From Bunezuela!,” on June 24th, 2016. The collection features 13 rock songs, 11 of which are covers, including “Armenia City in The Sky” (The Who), “Idea” (The Bee Gees) or “Tell Me” (The Rolling Stones).

The first single, “Do Something Real,” features Robert Pollard on vocals, and is a remake of a solo Pollard song that was released in 1999. The song is available now digitally.

Carlos is the drummer for the legendary rock band Cheap Trick, drumming countless hits like “I Want You To Want Me,” “Surrender,” “Dream Police,” and “If You Want My Love.”

Tracklisting for “Greetings From Bunezuela!”
1 Do Something Real (feat. Robert Pollard)
2 Armenia City In The Sky (feat. John Stirratt)
3 Him Or Me (feat. Hanson)
4 I Love You No More (feat. Alex Dezen)
5 Tell Me (feat. Alejandro Escovedo)
6 It Takes A Lot To Laugh, It Takes A Train To Cry (feat. Dave Pirner)
7 Let The Mystery Be (feat. Xeno)
8 Idea (feat. Robert Pollard)
9 Les Cactus (feat. Nicholas Tremulis)
10 I Can Only Give You Everything (feat. Rick Rizzo)
11 Slow Down (feat. Alejandro Escovedo)
12 Count On Me (feat. Xeno)
13 I Don’t Mind (feat. Alex Dezen)