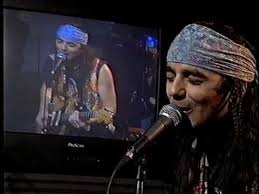 People talk about the Lanois sound. What, to you, is your sound?

Daniel Lanois: Maybe in the ’80s it was more specific to a certain approach, when I was doing a lot of records with Eno. We did a lot of textural work and I was really just serving Brian and his vision with those records, but I really got hooked on my effects. Since then, things have evolved and I don’t use so much of that now. My recent record coming out in the fall called Goodbye to Language, I developed this system of taking samples of already existing components and extracting them from—putting them out of sync with the track and then doctoring them externally through other boxes, maybe changing them to slow them down, and if I hit on something special then I go back in and find a spot for that special sound back into the track. It won’t work for most of the songs. I just run it randomly.

Is there a moment where you say, “Listen, guys, why don’t you try this instead?”

Lanois: There have been cases where maybe we just haven’t gotten the magic yet, and everybody is hoping to get it, and the best way to make a suggestion is to play a suggestion rather than talk about a suggestion. I reference the U2 song named “Beautiful Day.” We’d done a hand-played version of it, which never quite found its magic. So Eno and myself designed a more electronic, electro angle on it, which was built on a box [sings]—quite Germanic. We quickly put a version of it together in the morning prior to the band’s arrival and when they came in, they said, “What’s that? That sounds interesting.” We said, “Well, that’s your song. It’s just a rendition of it.” What was nice for Larry [Mullen] on drums, it got him away from the responsibility of playing the straight beat, so it gave him some freedom to experiment with something more unusual on the top. Sometimes people just need a little more of encouragement to go in a different direction. I never tell people that they’re wrong, or that it should be done this way rather than that. We might promote another approach, but by example, never by criticism. Criticism doesn’t work that way.