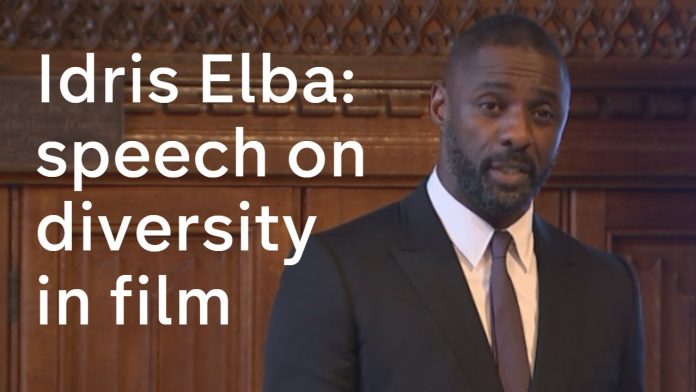 One of the country’s leading actors – Idris Elba – has said that the UK “the most successful, diverse, multi-cultural country on the earth”.

But the star of “Luther” and “The Wire” said there was one problem – you couldn’t tell that by what appears on our television screens.

“Are black people normally playing petty criminals? Are women always the love interest or talking about men?,” he asked.

Idris Elba was speaking at a parliamentary meeting organised by Channel 4 looking at diversity in the creative media.

“I’m not here to talk about black people. I’m here to talk about diversity. Diversity in the modern world is more than just skin color — it’s gender, age, disability, sexual orientation, social background, and — most important of all, as far as I’m concerned — diversity of thought. Because if you have genuine diversity of thought among people making TV and film, then you won’t accidentally shut out any of the groups I just mentioned.

“I was busy, I was getting lots of work, but I realized I could only play so many ‘best friends’ or ‘gang leaders.’ I knew I wasn’t going to land a lead role. I knew there wasn’t enough imagination in the industry for me to be seen as a lead.In other words, if I wanted to star in a British drama like ‘Luther,’ then I’d have to go to a country like America. Now some people might say, ‘But back then, Britain hardly had any black detectives, so how could you expect us to have a TV show about one? How could you expect the BBC to have the imagination to put Luther on TV?’Because it’s TELEVISION?!And the other thing was, because I never saw myself or my culture on TV, I stopped watching TV. Instead I decided to just go out and become TV. If I aspired to be on a level with the Denzel Washingtons and the Robert De Niros, I had to reinvent myself. I had to transform the way industry saw me. I had to climb out of the box.

“What all this taught me is too often people get locked inside boxes, and it’s not a great place to be. Ask women, they’ll say the same thing. Or disabled people. Or gay people. Or any number of underrepresented groups. So today I’m asking the TV and film industry to think outside the box and to GET outside the box.This isn’t a speech about race; this is a speech about imagination. Diversity of thought. Thankfully in our country, we’re free to say what we want. But we’re not as free as we think because our imagination isn’t that free.We can’t help putting people inside boxes, it’s a national pastime. Funny thing is, it’s not good for the people locked in the box, but it’s also not good for the people deciding what’s ON the box.

“The Britain I come from is the most successful, diverse, multicultural country on earth. But here’s my point: You wouldn’t know it if you turned on the TV. Too many of our creative decision-makers share the same background.They decide which stories get told and those stories decide how Britain is viewed. Even to ourselves. Especially to ourselves. Furthermore, how Britain is viewed on the world stage should concern all of us. It’s all our business.And that’s why everyone should care about our media industry — it’s the custodian of our global identity.”