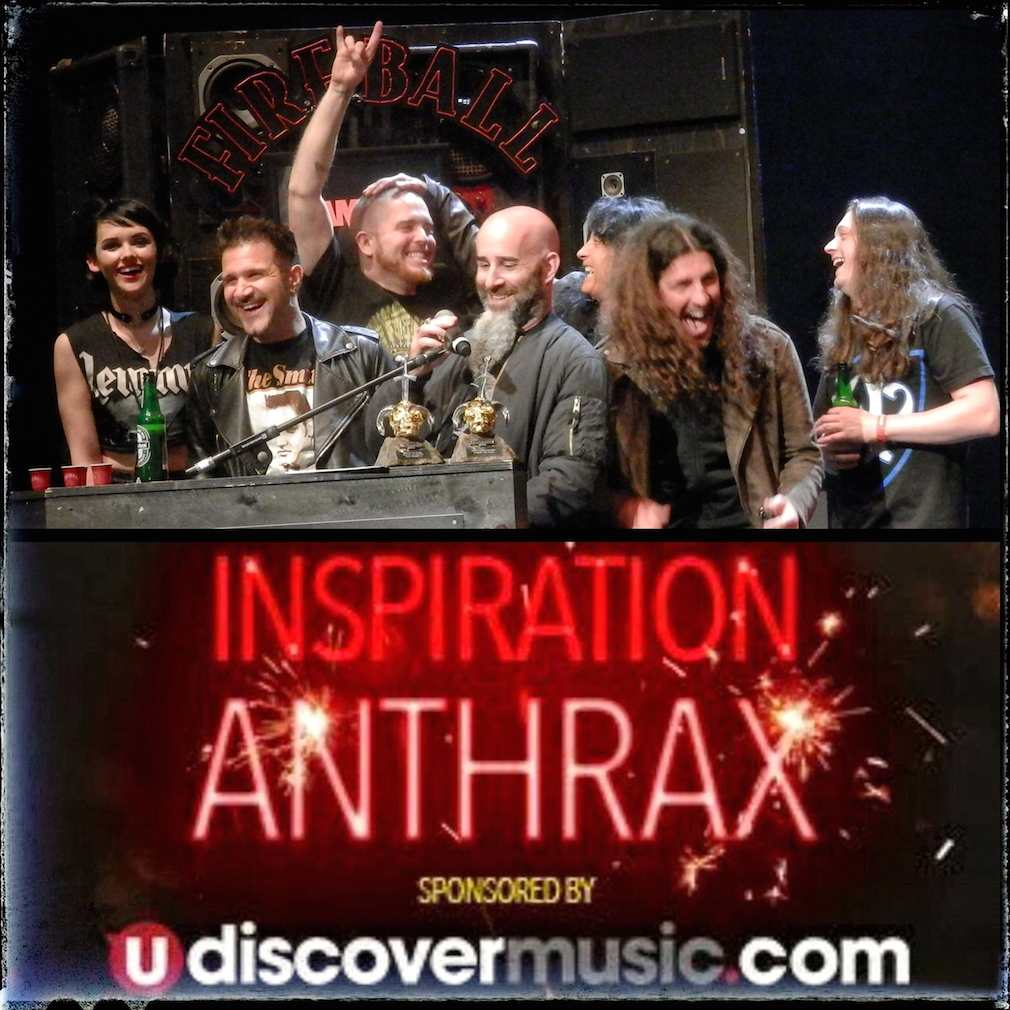 Thirty-five years ago today (July 18, 1981), the then New York-based thrash/metal band Anthrax was formed and started on the road to help change the history of music.

David Taylor, Anthrax fan, compiled a this video of the 1988 classic “Antisocial” over the past three-plus decades, as a a celebratory gift for the band and their 35th anniversary.

Said co-founder Scott Ian, “Thirty-five years have passed since that day and my life has changed profoundly. I am a husband, I am a father. I am a long way from the 17-year-old soon-to-be-college dropout who co-founded a heavy metal band. The only thing that hasn’t changed in 35 years, the one constant, is that I am still the rhythm guitar player in Anthrax. It’s what I GET to do. I GET to play in a band and I never take that for granted.”

So, with all those years, all those experiences, all those memories, what’s the one big takeaway experience that stands out for the guys? Was it when legendary author Stephen King included the band in one of his “Dark Tower” series books?
Or in 2012 when Anthrax became the first metal band to have its music played on Mars, when NASA played “Got The Time” to wake up the Mars Rover, Curiosity? Or how about in 1991 when they received their first Grammy nomination? Maybe it was when the band was caught up in the 2001 U.S. anthrax attacks and considered changing their name due to the PR nightmare that was caused. Or possibly it was when Anthrax made a cameo appearance on the popular 1992 TV series, “Married…with Children.”

Remembers Charlie Benante, the band’s drummer since 1983, “We had such a ball doing that show. We taped the episode twice, once in the afternoon then another one in the evening, which was done with rewrites. They changed some of our lines, but we got bigger laughs the second time so it was all worth it. After the show, we went to a sit-down dinner with the entire cast and crew at a restaurant in Hollywood. Here I am sitting next to Al Bundy [played by Ed O’Neill), and I look over at the booth across from us, and there are Clint Eastwood and Morgan Freeman having dinner. Al said, ‘hey, let’s go talk to Clint and Morgan,’ and I went ‘whaaaaa???’ He took us over there and introduced us to them – and I’m thinking ‘where am I? Am I here right now? This is actually happening?’ It was just surreal. That stands out as one of the highlights. It wasn’t really a musical thing, but music got us to that. I’m just a guy in a band making music…what am I doing here with these stars?”

Then there is newest member, lead guitarist Jonathan Donais who has a completely different take on his “best Anthrax moment.”
“It was probably 1989 or ’90, whenever the ‘Anti Social’ video blew up at Dial MTV,” he remembers. “It was the first time I’d ever heard Anthrax, and I immediately fell in love with the band.” Donais’ “best Anthrax memory” now happens like Groundhog Day: “I brought a tape of the Dial MTV performance to my guitar teacher and told him I wanted to learn how to play it. Now I get to play every night with the band!”

The most memorable time as a member of Anthrax could have been on September 14, 2011 as it was named “Anthrax Day” in the Bronx. Or June 22, 2010 when The Big Four played together on the same stage for the first time ever in Sofia, Bulgaria.

For Anthrax’s Ian, it was a different occasion. “My ONE thing of thousands of things I’ve done in Anthrax that stands out the most in the world would be playing Yankee Stadium,” he said, referencing The Big Four’s second of only two U.S. concerts, held on September 14, 2011. “For me that is the pinnacle. My mecca. The most NY thing a NY band could ever do. I got to play on stage on the field, in the building where so many of my heroes since I was a child played. It was surreal and overwhelming and I was in tears almost the entire first song, I had so much emotion pouring out of me. Like the words to the song say, I was ‘King of the hill, top of the heap.’

“So, to quote the Scottish poet Robbie Burns,” Ian adds,”‘Here’s to us; who is as good as us? Damn few, and they’re all dead.’ Thank you my friends…35 and counting.”